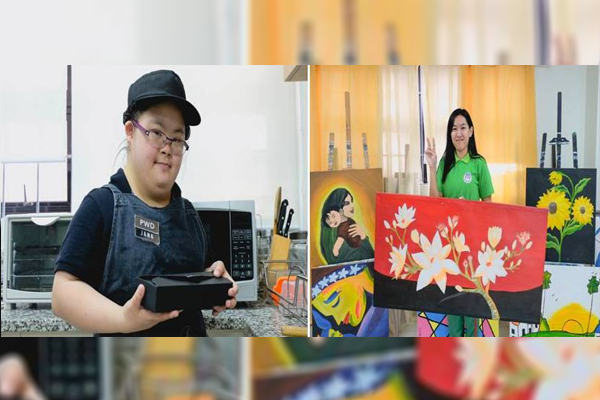 A special education center in Valenzuela City is empowering persons with disabilities (PWDs) to become persons with determination.

Jana Gan and Maribeth Luciano, two women with special needs, have broken the stigma on persons with disabilities (PWDs) and found no excuse to earn a living and help their own families.

They are only two of the several learners from Valenzuela City Special Education (VALSPED) Center, the only local government-funded one-stop-shop in the country offering both allied medical services and special education for PWDs, who have proven that people like them can also be employed and do what others can.

Gan said that she works to earn money to buy foods and clothes for her family.

“I’m saving my money. I put it in my bank account. So that we can buy our foods and clothes,” she said in Filipino.

Gan added that she also saves her income to buy her own car so that, in the future, her mother no longer has to bring her and fetch her at work.

Since Gan was employed in 2018, all the works in their donut shop have become easier, her employer said. Her main task is at the kitchen where she cooks the donuts; but she also initiates to serve orders and distribute promotional leaflets.

“The good thing about hiring PWDs is that they have focus. They know their routines. They are not like other employees who, according to employers, easily get distracted by cellphones or personal problems,” Dr. Ma. Teresita Pangan, VALSPED administrator, said.

“She also does not want to be absent nor [report] late to work. Sometimes, if I tell her not to work because of the heavy rains, she still insists to [come to] work,” Gan’s mother, Janet, added. “She knows her routine.”

Gan, who works three times a week and earns a minimum wage, explained, “What would happen to my colleagues? They have no one to help them if I’m absent.”

“They are not a burden to the company. In fact, they are angels. They are blessings,” Pangan added.

Meanwhile, Luciano, one of VALSPED’s 45 ‘sheltered learners’ who do not have to be employed outside and only produce art and other handicraft works inside the center, makes her own money through her paintings, which can be sold for up to P5,000 each.

“All the proceeds go to her. We just get the money that she used for art materials for the sustainability of our art program,” Pangan said. “She can earn at least P6,000-P7,000 a month.”

“Actually, many of her artworks were already bought by a cause-oriented company, including the ones they used for an exhibit and as a calendar design,” Pangan added. “There was a time when she was even able to earn P8,000.”

According to Luciano, her mother uses her earnings as a capital for their small karinderia, which is their main source of income to support her three siblings and the family’s needs.

“Mama food business,” Luciano, whose communication skill is also limited due to her condition, wrote.

Before she goes to the center in the afternoon, the artist also helps her mother in washing the dishes. She wants to ease her job.

Pangan said that Luciano is one of the longest enrolled learners at VALSPED. She was accepted in the center three years ago after her skill in arts was recognized when she was still studying in a public school.

Luciano’s hearing and speech may be limited, but she maintains a positive outlook, proving that she is still blessed with her God-given talent.

The four-storey VALSPED Center has been operating since 2016 and has already accepted a total of 972 learners.

The city government of Valenzuela, led by then-mayor Sen. Win Gatchalian and now Mayor Rex Gatchalian, aims to promote acceptance and inclusion of PWDs in the society, especially in the workplace.

The government believes that we are all equal and “no one should be left behind.”

“The center also offers both therapeutic services and special education for city residents with special needs. It also aims to hone them holistically, physically and mentally,” Pangan added.

For parent like Janet, enrolling their children with special needs in a special school helps them become independent.

“Most parents of PWDs fear of what will happen to their children when they die,” she said.

“That’s why through enrolling them in schools like VALSPED, our fear lessens as we know that they learn to socialize,” she added.

Gan has urged companies to hire PWDs, especially those who have down syndrome, as they can also do what others can. They are not different from the others. They can also learn.

Luciano added that people like her, who have hearing impairment, are willing to be trained. They deserve chances like others get. They also aspire for the possibility that they be soon employed.

“Don’t hire them because you pity them. Hire them because like other people, they need money to sustain their living. We should give them opportunity and be sensitive to their needs,” Pangan said.

“They are not a burden as they, too, could help their family. They are loving, generous and in fact, one of the most genuine people,” Pangan added.