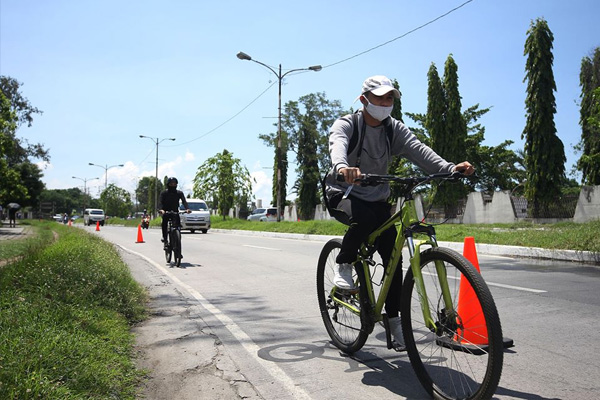 Taguig City vowed to maintain the accessibility of the 5.8-kilometer bike lane along the Laguna Lake Highway to provide workers an alternative mode of transportation during the community quarantine.

The city government ensured that the protected bike lane is clean and repainted as part of its comprehensive push for cycling as a viable mode of transportation for residents and workers on essential travel.

Directional signages were also installed during the World Bike Day celebration on June 3.

“We are welcoming everyone who wants to join the city in embracing this love for biking,” Mayor Lino Cayetano said.

“Take advantage to a very safe in-city biking spot. It’s free for everyone” he urged.

According to the mayor, the project is part of a multi-step approach to promote biking in Taguig City.

Bike lanes were also established along Cayetano Boulevard and Bayani Road for a three-day demo to test the volume of bikers “who can use the routes for essential travels during the general community quarantine for the purpose of establishing an integrated bike path within the city.”

Cayetano also commended the national government and the Department of Public Works and Highways (DPWH) in building the 5.8-kilometer bike lane along the highway, which has proven to be of great help for bikers.

Launched in February 2019, the three-meter wide stretch of road, which spans 5.8 kilometers, was the first protected bike lane along a national highway in the country, a prototype for new roads and existing roads wide enough to accommodate a bike lane.

The lane is separated from the highway with a planting strip, ensuring a permanent structure protecting bikers against high-speed traffic.

As such, the Taguig LGU partnered with the business sector to increase bike-friendly places and facilities, including protected lanes, showers, and restrooms for cyclists, and bike racks.