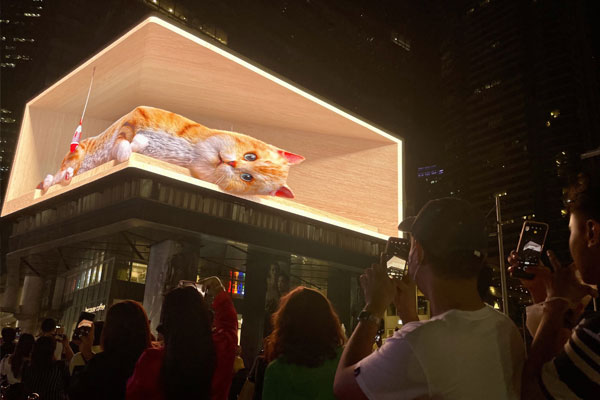 Bonifacio Global City (BGC) in Taguig City follows global urban centers in launching its own large outdoor 3D LED billboard to amplify the experience of shoppers, pedestrians, and motorists with the approach of the holiday season, according to a report by ABS-CBN.

The 400-square-meter L-shaped screen along the corner of 5th Avenue and One Bonifacio High Street is the first and largest of its kind in the Philippines, the BGC said during the billboard’s launch on Thursday.

The digital billboard uses anamorphic illusion technology such as sharp pixels and distortion perspective art to allow onlookers to visualize the 3D display with just the naked eye, the BGC said in a release.

Alfie Reyes, chief operating officer of Fort Bonifacio Development Corp., said the billboard was deliberately installed at the “epicenter” of the financial and lifestyle district.

He said this was similar to the placement of iconic screens overseas, such as Shibuya in Tokyo, Piccadilly Circus in London, and Times Square in New York City.

Reyes added they felt the time was right to unveil the billboard both as more people are going out of their homes for leisure and in time for the holiday season.

“After 2 years of the pandemic, malungkot lahat, now I think we are ready for a big bang, recovery is under way, and nakikita naman natin, buhay na buhay na ang mga shopping natin, and we’re also planning to have a lot of Christmas activities in BGC,” he said.

“So this is really something which is very timely and we feel would be really good for the estate.”

Passersby stopped in front of the LED screen to watch the displays and also shoot them on their cellphones.

Dior Co, a BGC resident, noticed the screen while walking around with her 5-year-old daughter Elise.

“Living here in BGC it’s always very vibrant. So to see that they’ve even added more lights and more entertainment is just amazing for us who live in the city,” she said.

“And we think that if it’s done right, it really is going to be a ‘wow’ experience.”