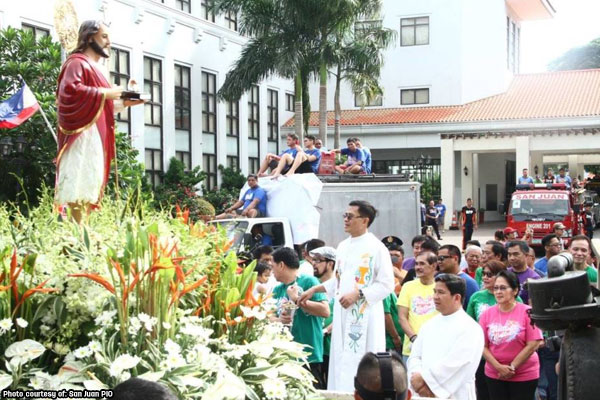 Five ways to celebrate the feast of St. John the Baptist without wasting water

It’s that time of year again when commuters who frequently pass through San Juan to get to wherever they’re going suddenly change routes to avoid the city like the plague. June 24 is the feast day of St. John the Baptist, the Catholic saint said to have ushered in Jesus’ ministry when he baptized the latter in the River Jordan. The feast day doesn’t celebrate that event, but the saint’s birth, which makes one wonder why Filipinos, particularly residents of San Juan, mark the occasion by dousing passersby with water.

In the Canadian provinces of New Brunswick and Newfoundland and Labrador, where St. John the Baptist is a patron saint, two cities are named in his honor, St. John’s Newfoundland and Saint John, New Brunswick. On his feast day, the city of Quebec marks it as the Fête Nationale du Québec, while Newfoundland celebrates it as Discovery Day. No dousing of water there.

On the eve of the feast day, the saint is celebrated in Porto, the second largest city in Portugal, in the Festa de São João, which is often touted as one of Europe’s liveliest street festivals. No dousing of water there, too, only street concerts, popular dancing parties, jumping over flames, eating barbecued sardines and meat, drinking wine – and lots of it – and releasing illuminated flame-propelled balloons over Porto.

This year, officials of San juan, a city named in honor of the saint, is set to celebrate what they call the Wattah Wattah Festival in the midst of one of the worst water supply crises to ever hit Metro Manila in recent years.

To justify the waste use of water during the festival, officials of San Juan, led by still incumbent Mayor Guia Gomez, said:

On Saturday, a Catholic bishop, citing the ongoing water supply shortage being experienced in Metro Manila and nearby provinces, called on the faithful to refrain from using water to celebrate the feast of St. John the Baptist.

“It is very advisable and within a very good cause that we refrain from dousing or playing with water to celebrate the feast,” said Bataan Bishop Ruperto Santos. “With our situation now where water is so precious, let us conserve it and use it for our needs.”

So if the people can’t douse other people with water to celebrate the feast day of their most beloved saint, what else can they do?

Here are five other ways to celebrate the feast of St. John the Baptist without wasting water:

Clean up the Pasig River

Since all the residents are already pumped and ready to spring into action, why not rally them to conduct a massive clean up drive of the San Juan River, one of the Pasig River’s tributaries.

In 2018, the Pasig River Rehabilitation Commission named the San Juan River as the most polluted waterway of Metro Manila. The agency placed trash traps in parts of the river. In April that year, almost 8,000 sacks of garbage weighing about 4,000 kilograms were collected from San Juan River.

So, yeah, a cleanup drive of the San Juan River would be an ideal alternative to dousing passersby, most of whom unsuspecting, with water. That’s the least they could do. The San Juan City government could step it up a notch by educating residents on proper waste disposal and environmental conservation.

Based on recent reports, the San Juan City government has in the past week extolled the virtues of water conservation through a campaign. So did the residents save water in buckets and drums to use in the festival?

If they did, there’s good news! They can, as an alternative to using the saved up water to douse passing vehicles and commuters, donate these barrels upon barrels of water to those who need it more. Mandaluyong City comes to mind. In previous months, parts of Mandaluyong City suffered the worst water supply interruptions.

Doing this just might put a smile across the patron saint’s face.

Have a competition on water conservation

Give gifts to passersby

Instead of dousing passersby with water, why not shower them with gifts and attention. Gift-giving is not a foreign concept when it comes to celebrating feast days, such as those of St. Nicholas and St. Valentine.

What to give to passersby as gifts? Small trinkets, such as keychains and other baubles. Maybe even a small – nay, minuscule – bottle of water as a keychain. Anything really. Too expensive? Try giving commuters on passing jeepneys candy. Just make sure to remind them not to throw the candy wrappers in the streets.

Distribute goggles and use water from the ocean

If San Juan must have its Wattah Wattah Festival with, well, water, there’s plenty of it in the ocean, and it probably won’t make a dent in the environment. The only problem with seawater is salty, so those doing the dousing might end up hurting other people. Another problem is logistics, as San Juan City is landlocked.