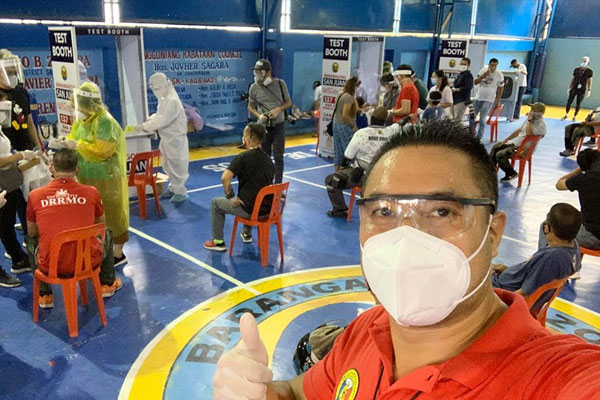 San Juan City began on April 24 the mass testing of frontline personnel and persons under investigation and monitoring for coronavirus disease 2019.

Mayor Francis Zamora said that the city government is using the polymerase chain reaction (PCR) testing which has been hailed by the World Health Organization (WHO) as the “gold standard of tests” for COVID-19.

“This is the beginning of our mass testing here in the City of San Juan. What we use here is PCR COVID-19 testing,” Zamora said in Filipino. “We use the PCR testing because the PCR has a 95 to 97 percent accuracy,” he added.

According to him, the conduct of mass testing inside a covered court was safe because health personnel conducting the swabbing were wearing personal protective equipment.

“The PUIs, PUMs and those to be tested had masks, gloves, and observed social distancing,” Zamora explained.

“It was in a basketball court that had proper ventilation. Dangerous if air conditioned area kasi mas prone magspread yung virus. All precautionary measures were undertaken,” he explained.

The mayor said those tested who came from neighboring barangays were picked up and brought home using ambulances. “In short, safe siya (it is safe),” he noted, adding that the venue will be disinfected after the testing.

Coinciding with the start of the mass testing was launching of the city’s “mobile COVID-19 mass testing.”

The mayor said the mobile mass testing booths will visit each barangay in the city to conduct COVID-19 tests to qualified individuals in the coming days.

In order to conduct its own mass testing, Zamora said the local government partnered with a molecular diagnostic laboratory accredited by the Department of Health (DOH), and the University of the Philippines-National Institutes of Health (UP-NIH).

The city mayor noted that the COVID-19 mass testing of the local government is free of charge. “Our purpose here is to find out who are those positive for COVID-19.

If they will test positive, we will immediately confine them at San Juan Medical Center,” Zamora said.

“They will pay nothing. The city government will pay for their hospital bills if they will be confined,” he added.