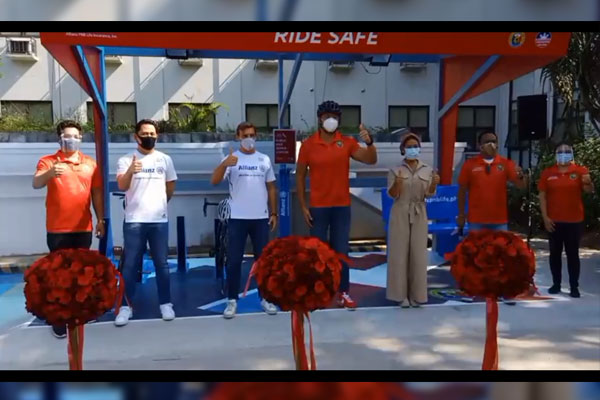 The country's first solar-powered bike pit stop and repair station opened in San Juan City, according to a report by Philippine News Agency.

San Juan Mayor Francis Zamora said the biking facility, though located within the premises of the city hall, is open to all bikers.

"We will station people here, everyday in the morning until the curfew ends," he said.

It has earlier inked a sponsorship agreement with its private partner, Allianz PNB Life Insurance Inc. to pursue the biking initiative.

Zamora said the agreement involved the installation of hundreds of safety bollards in major biking areas within the city to ensure safe lanes for bikers.

The construction of the pit stop includes the building of bike parking areas, bikers' resting area along with a small footprint bike repair station complete with hanger arms, repair tools, and air pump.

Zamora said each employee is allowed to borrow a bike for one week. To allow more employees to avail of the bike sharing program, he said the city government targets to add more bicycles by 2021.
He assured that the bikers can safely roam around the city with an established bike-friendly environment while public transportation is still limited due to the pandemic.

"It is a holistic progressive approach on how to change this city," he said.

The Mobility Awards has earlier named San Juan, Pasig, and Marikina as the most bicycle-friendly cities, transport and sustainability advocates in Metro Manila.

Zamora said the city government continues to ensure that the residents are strictly following the mandatory safety measures and health protocols.
With the deployment of the bike patrollers.

Zamora said the strict implementation of quarantine protocols including the wearing of face masks and shields as well as the city's anti-spitting ordinance are closely monitored.

Bike patrollers are tasked to secure the safety of the bikers and maintain the bike lanes as well as to oversee the imposition of health protocols.

"It's one of the reasons why people follow our ordinances because they know that the city government is strictly monitoring," Zamora said.