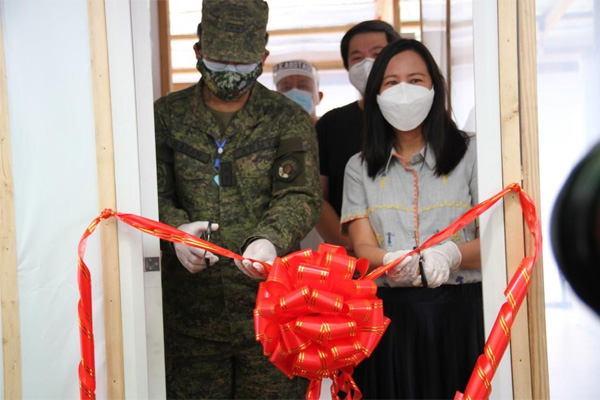 The Armed Forces of the Philippines (AFP) in cooperation with the WTA Architecture Design Studio completed and turned over two emergency quarantine facilities (EQF) in a simple ceremony in Rosario Maclang Bautista General Hospital (RMBGH), Quezon City on May 29, 2020.

The 69th and 70th EQFs are constructed in Novaliches District Hospital (NDH) and RMBGH respectively.

The 12-bed capacity EQF of NDH was funded by the Samaritan’s Purse International Relief and constructed by the 51st Engineering Brigade of the Philippine Army led by Brigadier General Emmanuel Anthony Ramos, and on the other hand, the 15-bed capacity EQF of RMBGH was funded by Task Force Ican: A Sisterhood Project and constructed by the 3rd Naval Combat Engineering Battalion of the Philippine Navy led by its acting Battalion Commander, Lieutenant Commander Wally Casas.

The EQFs are designed to treat and isolate COVID-19 patients with mild to no symptoms and should help decongest hospitals and increase the country’s capacity to contain the COVID-19 pandemic.

Their current goal is to construct 75 sites and hopes to raise more funds in order to fulfill requests from different hospitals and local government units.

“The AFP expresses its gratitude to all the people who cooperated and contributed for the success of this initiative, the WTA, Samaritan’s Purse Philippines, Task Force Ican, the different engineering units of the AFP, and the Quezon City Government. We hope that the cooperation between the private and public sector continues and the Bayanihan spirit lives on as we collectively face the threat of this unseen enemy, COVID-19.” AFP Chief of Staff General Felimon Santos Jr said.