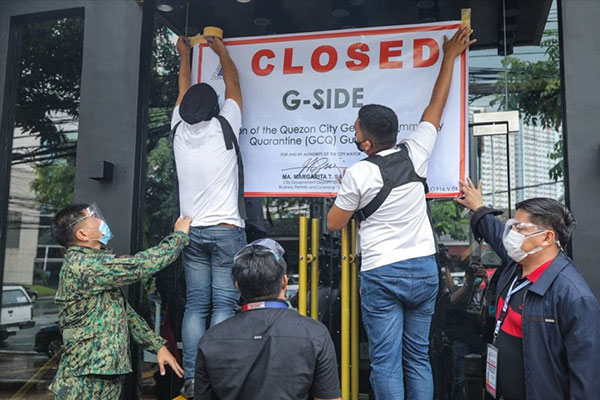 Aside from violating the latest GCQ guidelines, the establishments also violated the Public Safety Hours and minimum health protocols.

“The patrons of these bars even had the audacity to post in social media their wanton violation of health and safety protocols, oblivious to the fact that there are more transmissible variants now and public safety remains at risk,” Mayor Joy Belmonte said.

“We support economic recovery and job creation but these should not be at the expense of public health. We will not hesitate to close down establishments if and when we find out these businesses are venues of super spreader events,” added Margie Santos, BPLD Head.

On July 9, the Quezon City Task Force Disiplina together with the Quezon City Police District apprehended several individuals operating bars and clubs during an inspection in Barangays Paligsahan and Timog.

The enforcers also inspected nearby clubs and resto bars, where some individuals involved in the operation of these establishments were also apprehended for violating quarantine protocols.

“We will file appropriate charges against the owners of these bars and clubs at the city prosecutor’s office for violating the GCQ guidelines set by the national and local government,” TF Disiplina head Ranulfo Ludovica said.

Mayor Joy Belmonte reiterated her call to the public to follow quarantine protocols, “Lagi po namin pinapaalalahanan ang ating mga residente na sundin ang health protocols and guidelines, kapag bawal –bawal talaga. No one is exempted from the law, any person who will violate our protocols will be apprehended or will face charges.”

Meanwhile, the 19 arrested violators were brought for Inquest Proceedings on July 10 under Atty. Mark Oliver Asis, Public Attorney III for violations of R.A. 11332 or Mandatory Reporting of Notifiable Diseases and Health Events of Public Health Concern Act, violation of IATF protocols, Quezon City Ordinance No. SP- 2938, S-2020, An ordinance providing penalties for violation of Executive Order No. 31, series of 2020 of the City Mayor in the Regulation of the Sale and Consumption of Alcoholic Beverages in Quezon City, Quezon City Ordinance SP-91, S-93 or The QC Revenue Code, and RA 10364 an Act Expanding R.A. 9208 or Anti-Trafficking in Persons Act of 2003.

The owners of the said establishment will also be charged with the same offenses.

“The QCPD has been receiving numerous complaints from concerned citizens that Resto bars in Quezon City have been operating, and it is a clear violation of IATF protocols under General Community Quarantine (GCQ). Visitations, inspections, and monitoring on the different bars and establishment will be continuously implemented in Quezon City.”