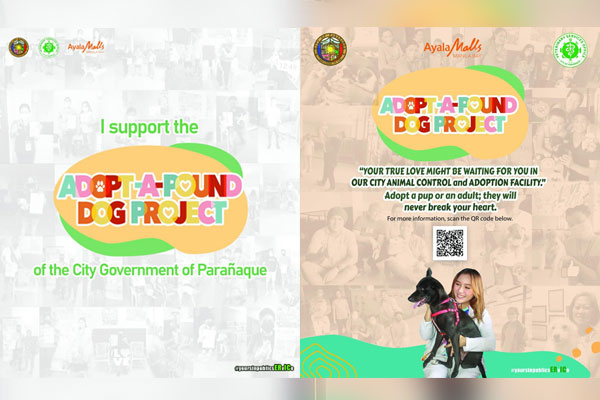 The city government of Parañaque launched the adopt-a-pound dog project to search for responsible fur-parents for five dogs that are under the care of the City Veterinary Office (CVO), according to a report by Manila Bulletin.

Mayor Eric Olivarez said interested fur-parents who want to adopt a dog or cat may first secure a screening form from the City Veterinary Office’s pop-up booth at Ayala Malls Manila Bay and submit the duly accomplished form at a drop box.

Olivarez said they can also send an email to parañaque.vso@gmail.com to request for a screening form on a Microsoft Word format and send it back once accomplished.

He said the CVO will also conduct an interview and counseling before signing the documents for fur-parents who passed the screening.

The mayor said dogs under the care of VCO were all vaccinated with anti-rabies and were already dewormed.

Olivarez said five dogs were posted by the VCO that are ready for adoption. They are “Natsu,” a male brown dog that “has fire in his eyes that represents his love for everyone. He is also protective and a loyal dog despite his experience of being abandoned in the street;” and “Mirajane,” a female brown/black dog dancer “who loves to stomp her feet whenever she gets excited and loves to play with kids and toddlers.”

The three other dogs up for adoption are “Freed,” a male dog who is very energetic and loves to zoom around and play with other dogs inside the facility; “Zeref,” a very timid dog but sweet and adorable; and “Toshiro,” a very short tempered dog who barks at anyone who tries to disturb his siesta. However, despite his odd behavior, Toshiro is ready to give love, cuddles, and kisses.