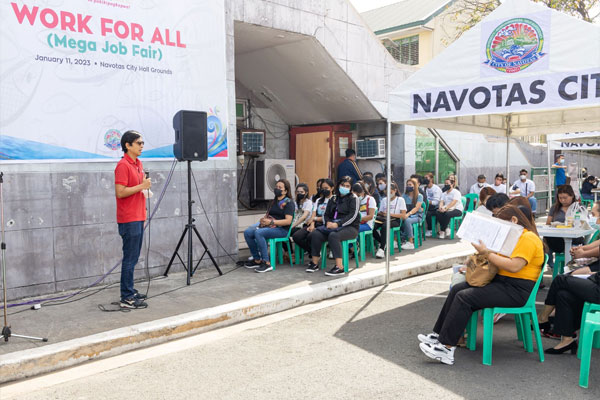 The Navotas City government held the “Work For All Mega Job Fair” at the Navotas City Hall Grounds on Wednesday, Jan. 11, as part of the city’s 117th founding anniversary, according to a report by Manila Bulletin.

Work For All Mega Job Fair is a career expo open to all city residents aged 18 and above, including persons with disabilities (PWDs) and senior citizens. It was initiated by the NavoAtas Hanapbuhay Center and the local government to address the increasing number of jobless residents in the city.

The NavoAtas Hanapbuhay Center is the livelihood organization in the city that seeks to provide job opportunities to locals.

About 21 companies and agencies supported the job expo by offering various job positions such as company driver, messenger and electrician.

The applicants also underwent a pre-employment seminar the day before the job fair to learn how to answer job interview questions.

Walk-in applicants were also allowed to join the job fair.

A total of 351 applicants attended the job fair, bringing to 1,018 the number of applicants registered in 2022.

In line with the Navotas Day week-long celebration, the city government said there will be more programs and activities in the coming days.