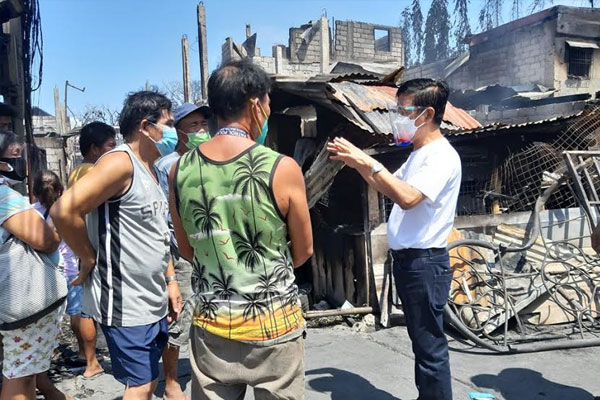 Mayor Jaime Fresnedi visits residents who were affected by a fire incident in Brgy. Cupang last April 28. The local government has provided hot meals and family kits to affected families who are temporarily taking shelter at Mullet Compound Covered Court. Fire victims are also set to receive financial assistance through a local resolution.

A four-hour fire incident displaced at least 200 families in a residential area along PNR Site in Barangay Cupang, Muntinlupa City before midnight Tuesday.

According to an initial report from Muntinlupa City Fire Station, the fire broke out at Aquino Damaso Compound, Purok 2, PNR Site in Brgy. Cupang at 11:36 PM last April 27.

The fire was raised to 2nd alarm leaving 50 houses damaged and around 200 families or 1,000 individuals affected. The estimated damage in the area is at 1,400,000 pesos. A total of 79 fire trucks from the Bureau of Fire Protection (BFP), city government, and other volunteer groups responded to the incident.

BFP declared fire out in the area at around 4:02 AM of April 28 and the cause of fire is still under investigation.

Further, the City Health Office and Department of Disaster Resilience and Management are closely monitoring the evacuation center to mitigate COVID-19 transmission. Fire victims are also set to receive financial assistance through a local resolution.