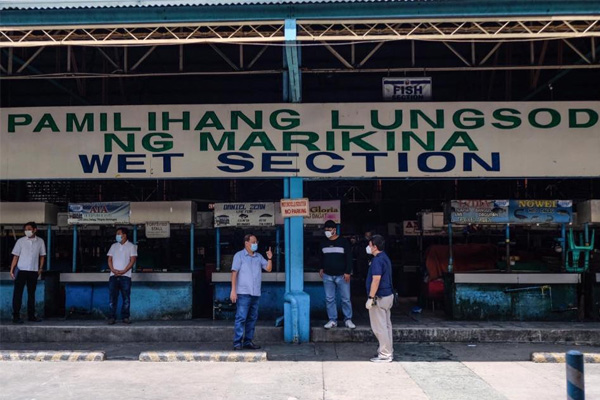 Marikina City Mayor Marcelino Teodoro ordered the closure of parts of the city's public market for massive disinfection following the death of a 72-year-old vendor who succumbed to a respiratory illness suspected to be coronavirus disease 2019 (Covid-19) case.

The sections of the market closed are the Wet Section—fish, poultry, meat; Grocery; Carinderia Section; Fruits and Vegetables Section; and Coconut/Niyugan Section.

Teodoro said he ordered the closure and massive disinfection of the sections of the market for the safety of the public and as a precautionary measure against the dreaded disease.

He also directed the City Epidemiological Surveillance Unit (CESU) to quickly conduct contact tracing of those people the vendor might have come in contact with the vendor.

“We are conducting multi-point contact tracing here in Marikina. Three parallel tracing to cross reference the results. This is being done to validate,” he said in a statement sent to reporters.

He also ordered the Marikina City Public Market personnel to disinfect the whole public market until Tuesday (April 21). On Wednesday, the market will be operational again after the thorough disinfection.

He said that the 72-year-old vendor who showed Covid-19-like symptoms never got the chance to get tested.

“Namatay siya tatlong araw matapos kakitaan ng sintomas. Hindi na-test ‘yung namatay kaya hindi pa tukoy kung Covid-19 ang kinamatay niya. Ito ang problema kung hindi tayo nakakapag-testing (He died three days after manifesting symptoms. He was not tested so it is unknown yet whether he succumbed to Covid-19. This is the problem if we do not hold testing),” he said.

He also urged people who had direct contact with the 72-year-old man to voluntarily go to the CESU and get interviewed by the medical team.

Teodoro was assured by doctors that “the virus will die naturally in two days in the absence of human transmission”.

Other areas of the public market, the mayor said, will be thoroughly decontaminated by Marikina City Public Market personnel in the following days.

The city government is asking for the understanding of the public during these trying times as drastic measures must be done to ensure the safety of the public.

So far, the Marikina City Health Department said that the city has 79 confirmed cases of Covid-19, 11 recoveries, and 17 deaths.

There is only one probable and 22 suspect cases in the city, he added.