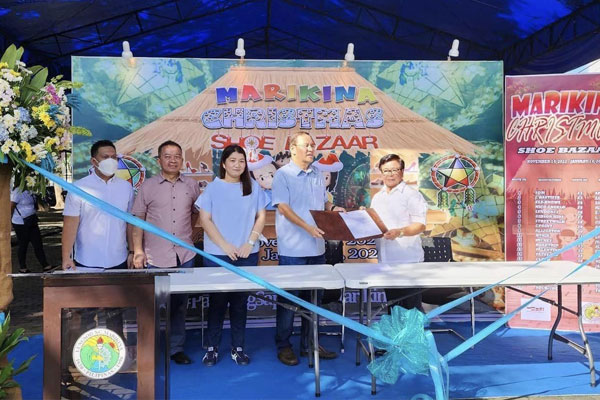 Marikina City Mayor Marcelino Teodoro said he is looking at the possibility of perpetually waiving fees for those who will participate in shoe bazaars, according to a report by Philippine News Agency.

Teodoro and his wife, Marikina First District Representative Marjorie Ann Teodoro made the announcement as they led the opening of this year’s Marikina Christmas Shoe Bazaar at the Freedom Park in front of the City Hall.

During the opening of the bazaar, Teodoro signed Ordinance No. 191, Series of 2022 titled “Ordinance Granting Exemption to members of the Philippine Footwear Federation Incorporated from paying the rental fees on the use of shoe exhibition stalls at the Freedom Park during the 2022 Sapatos Festival.”

He also lamented that the challenges encountered by the city’s post-pandemic recovery efforts have been difficult, noting that the shoe industry struggled due to the impacts of the health crisis.

Acknowledging the current state of the economy under the new normal, the lawmaker said this is the reason why the city government wants to help businesses in the shoe capital to thrive and prosper.

Present during the opening of the bazaar were key city officials and members of the Philippine Footwear Federation, Inc. (PFFI), led by its chairperson Antonio “Tony” Andres.

The city government said the bazaar showcases quality, affordable, and durable shoes, bags, belts, and other leather products made by the city's skilled craftsmen.

A total of 42 footwear and leather goods manufacturers participated in this year’s bazaar.

The bazaar is open from Monday to Sunday starting 9 a.m. to 7 p.m.

The mayor, meanwhile, said he is planning to bring the Marikina Shoe Bazaar to various locations across the country to promote affordable and durable Marikina-made footwear and leather products.

He also expressed confidence that despite the challenges faced by the local shoe industry due to the pandemic, Marikina’s shoemakers will be able to overcome the impacts of the pandemic.

Meanwhile, the Bureau of Jail Management and Penology (BJMP) is encouraging the public to support and buy the products of persons deprived of liberty (PDL) as the Christmas holiday approaches.

Aside from Christmas trees and lanterns, PDL products that are also in demand and could be perfect gifts this Christmas are handcrafted fashion bags, coin purses, stuffed toys, and indigenous products.

While the BJMP is implementing rehabilitative and development programs for the PDLs, the agency is also working on the profitability and market interest of these products.

Each brand handicraft is capable to speak of the program of the agency on the welfare and development of PDL.

“Aside from continuously improving the quality of the products, we should create more avenues and platforms to support the PDL products,” said Iral.

The livelihood activities in jails are an integral component of the reformation programs for PDL in BJMP facilities nationwide.

Orders and inquiries can be coursed through Jail Officer 1 Jovelyn Domingo, Livelihood Program Monitoring Officer of the BJMP-National Headquarters at cellphone number 0930-268-8533.