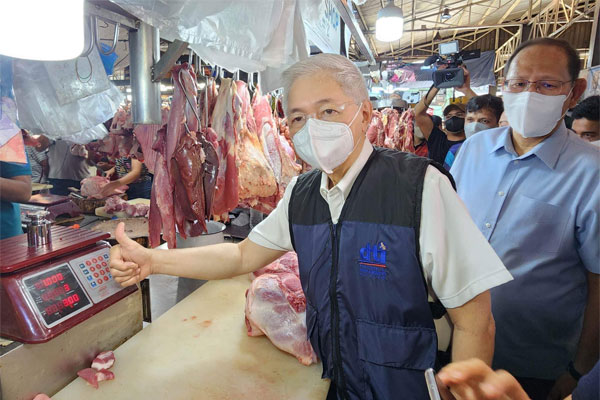 The Department of Trade and Industry (DTI), led by Secretary Alfredo Pascual, found all weighing scales in the Marikina Public Market and supermarkets in the city as functioning well and accurate, according to a report by Manila Bulletin.

Marikina City Mayor Marcelino “Marcy” Teodoro joined Pascual and other DTI officials in the launching of the “Ikot Palengke” program of the DTI at the Marikina Public Market on Wednesday morning, Nov. 23.

“Ikot Palengke” aims to ensure the adequate supply of basic necessities and prime commodities (BNPCs) and to verify the prices of goods in markets and supermarkets if they are compliant with the DTI’s price regulations or the Suggested Retail Price (SRP).

Teodoro and Pascual also checked the weighing scales being used in the markets if they are functioning well and show accurate readings.

The local government said no irregularities were seen in regards to the prices of goods during their inspections.

The price of whole chicken in the wet market was P180 per kilo, while pork was P280 per kilo. Assorted vegetables such as ampalaya, potatoes, eggplants, and cabbages were priced at around P120 to P150 per kilo.

The supply of primary goods such as rice, sugar, poultry products, fish, vegetables, and even Noche Buena products were normal, the local government added.

The activity was Pascual’s first onsite market inspection since assuming the post of DTI secretary.

The officials went to the various stalls selling chicken, pork, fish, and vegetable products in the wet market. The vendors promptly answered their inquiries regarding their products.

After roving the wet market, they proceeded to inspect the Noche Buena items being sold in Savemore and Robinsons supermarkets.

Pascual assured the public that the DTI communicates and coordinates with the product manufacturers, especially those whose products are meant for the mass market, in regard to price hikes.