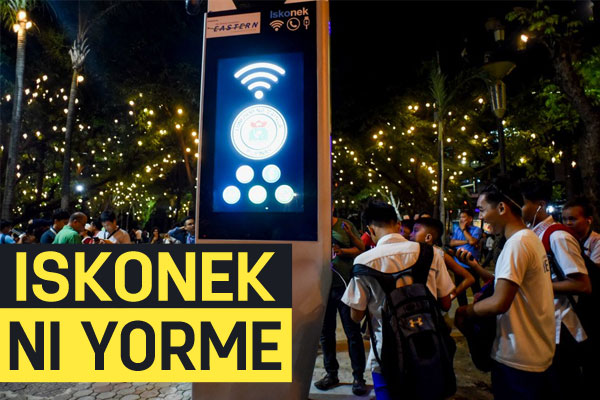 Manila Mayor Isko Moreno on Wednesday unveiled a kiosk that serves as a free WiFi hotspot, charging station and phone booth outside the Manila City Hall, the latest upgrade to the park surrounding the capital’s seat of power.

The ISKOnek, powered by Eastern Communications, can serve 100 users at a time, according to Moreno.

Each user can connect for 30 minutes before he or she is “kicked out of the system” so other people can connect, he said.

“Connectivity now is a necessity. Ito yung tipong ‘pag nawalan ka ng data o load (when you run out of data or load), you can use it,” he said.

The kiosk’s WiFi speed can reach up to 80 mbps, according to initial tests done by the media.

The fiber-powered system is equipped with charging ports and can also be used to make free landline calls, Moreno said.

Overseas calls can be made via the kiosk through social messaging apps, he said.

Closed-circuit television cameras were placed on top of the kiosk’s back-to-back LED screens to provide some level of security, the mayor said.

In the future, an emergency button, which will alert a command center inside the city hall, will be integrated into the system, he said.

Eastern Communications and the city government will monitor its speed and efficiency for a few weeks, Moreno said.

If successful, the city will put up 50 more kiosks in areas with high foot traffic like hospitals and schools, said the mayor.