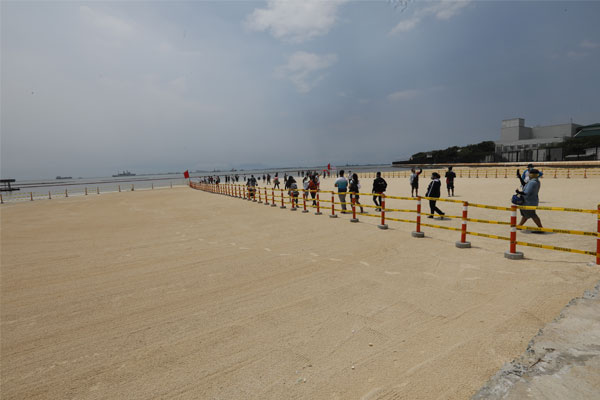 President Rodrigo Duterte has recognized Environment Secretary Roy Cimatu for leading the efforts to rehabilitate Manila Bay, according to a report by Philippine News Agency.

In a taped public address, Duterte said he was impressed by how Cimatu is able to succeed in yet another challenge to rehabilitate a well-known tourist spot in the country's capital, particularly known for its famous sunset.

“Let us begin by congratulating Secretary Cimatu. You know I remember that meeting and I think everybody was there when I said, ‘Roy, kaya mong linisin ‘to (can you clean this up)?’ And his answer was a very curtly given, he said, ‘Kaya kong trabahuhin (I can work on it),’” Duterte said.

A portion of the Manila Bay was temporarily reopened to the public over the weekend after crushed dolomite was laid on its shoreline near the US Embassy.

Duterte said he was pleased because people are now enjoying the benefits of “the determined action of a Cabinet member to do good”.

“Napabilib niya ako (He really impressed me) when he accepted my dare,” he said.

He also thanked other Cabinet members for helping him run the country.

“Kung wala kayo (Without you), I would have a very hard time running the country. But because you are there… I’m not saying I have succeeded. That is for the people to --- to assess or give when I’m no longer the President,” he said.

During the reopening, throngs of people flocked to the area to take photos and videos. At one point, the people failed to observe physical distancing along Roxas Boulevard, eventually getting viral on social media.

Malacañang said the crowd of visitors which flocked to the segment of Manila Bay's shoreline showed that the decision of the government to cover it with "white sand" was a “good decision”.