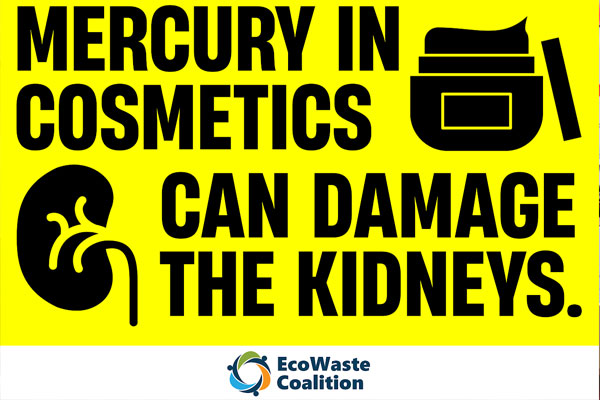 Despite the global ban under the Minamata Convention on Mercury, several stores in Manila City continue to sell skin whitening creams laden with mercury, a chemical prohibited in cosmetic products.

The toxics watchdog group EcoWaste Coalition drew attention to the unlawful trade of such products imported from China, Indonesia and Pakistan following the market monitoring it conducted on November 26 and 27 in Divisoria, Sta. Cruz and Quiapo.

“To protect human health from the harmful effects of mercury exposure, we call upon the office of Manila Mayor Honey Lacuna to conduct law enforcement operations to rid the city of banned cosmetics containing mercury,” stated Aileen Lucero, National Coordinator, EcoWaste Coalition.  “Mayor Lacuna’s immediate action will protect not only the Manileños, but all other citizens who come to the city to shop.”

Collagen Plus Vit E, Feique, Goree and S’Zitang facial creams, which the Food and Drug Administration (FDA) had banned for containing mercury and/or for lacking market authorization, were among those openly sold in the city as if these products are authorized and pose no health risks.

According to the FDA,  the “adverse health effects brought about by highly toxic mercury in cosmetic products include kidney damage, skin rashes, skin discoloration and scarring,” adding “chronic use reduces the skin’s normal resistance against bacterial and fungal infections.”

Six stores located on the first and second floors of Tutuban Center (Prime Block) sell Goree Beauty Cream with Lycopene and Goree Day & Night Beauty Cream, which the FDA banned through Advisory No. 2017-289 for containing levels of mercury above the one part per million (ppm) limit.  Another store at QQ Mall sells the banned Goree products from Pakistan.

One store at Manila City Plaza sells Feique Herbal Extract Whitening Anti-Freckle Set, which was among the mercury-containing cosmetics banned in 2014 under FDA Advisory No. 2013-053-A.

At least five stores located at Victory Lacson Underpass and the adjacent Bautista and Elizondo Streets sell Collagen Plus Vit E Day & Night Cream from Indonesia.  FDA Advisory No. 2021-0646 cautioned consumers against buying and using this unauthorized product, warning “the use of such a violative product may pose health risk to consumers.”

The EcoWaste Coalition is campaigning for the stringent enforcement of the global ban of mercury in cosmetics such as skin lightening creams and soaps to protect human health and the environment.  In line with this, the group is urging local government units to enact ordinances prohibiting and penalizing the manufacture, importation, distribution and sale of such toxic cosmetics.