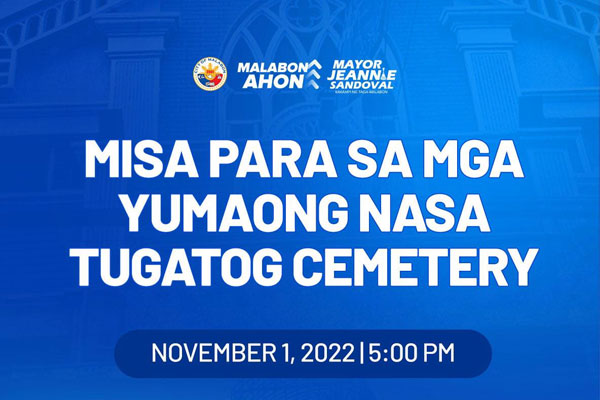 The city government of Malabon has announced that a Holy Mass will be offered on Tuesday, Nov. 1, for the deceased members of the Aglipayan Church who were buried in Tugatog Cemetery, according to a report by Manila Bulletin.

The Holy Mass will be held at the Simbahang Aglipay ng Malabon (Parokya ng La Purisima Concepcion) at around 5 p.m. It will also be broadcast live on the city’s Facebook page.

The local government earlier said that the Tugatog Cemetery will still be closed to visitors on “Undas” as its rehabilitation is yet to be completed. Visitors can offer flowers or light candles for their loved ones in an area in front of the cemetery.

Malabon City Mayor Jeannie Sandoval went on Tuesday to the Tugatog Cemetery to offer flowers and light a candle for the deceased buried in the cemetery.

The city government assured that members of its medical, and security and response team were deployed to all the cemeteries in the city to assist the people who will visit the graves of their loved ones.

He said that the city government has intensified the implementation of its guidelines for “Undas” to ensure the safety of the visitors.

The Caloocan City government, led by the City Health Department, also placed Covid-19 vaccination stations at the cemeteries in North and South Caloocan for individuals who want to get inoculated against the disease.