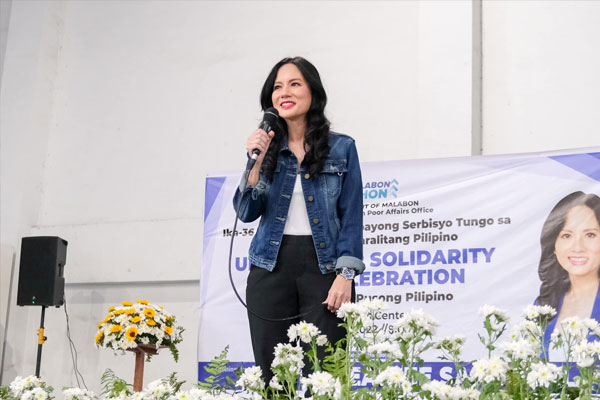 Malabon City Mayor Jeannie Sandoval reported on Monday, Jan. 16, the city’s accomplishments in her first six months (from July to December 2022) as its local chief executive, according to a report by Manila Bulletin.

During her speech at the San Bartolome Parish, the lady mayor cited the programs and projects of the local government implemented to improve the lives of the citizens.

One of the projects she highlighted as the “Malabon Ahon Blue Card” launched in December 2022 to be used by more or less 94,000 households in getting various social and financial assistance from the city government.

The local government said that the Malabon Ahon Blue Card will increase transparency and efficiency of the mayor’s administration by utilizing an electronic financial system in distributing social services.

Sandoval said that they have already registered over 26,000 families in their database for the cards which will be distributed starting Feb. 6.

The mayor also said that the superhealth centers in Barangay Catmon, Longos, Potrero, and Tonsuya, led by the City Health Department, have assisted over 200,000 individuals, while more than 11,000 patients were served in Ospital ng Malabon.

She said that they are planning to make the Ospital ng Malabon a “Level II” hospital with complete machines and equipment to better serve those who live in the city.

According to Sandoval, 79 families were awarded with certificates of unit and lot allocation, while around 5,000 residents have also participated in weekly clean-up drives in Malabon.

“Ngayong taon (2023) ay magkakaroon tayo ng 450 Million na pondo para sa land for the landless at socialized housing sa Malabon dahil kinikilala natin ang kahalagahan ng mga proyektong palupa at pabahay para sa ating mga nasasakupan (This year, we will have a P450-million fund for the land-for-the landless and social housing projects in Malabon because we recognize the importance of land and housing programs for our people),” the mayor said.

The third floor of the city hall was renovated for taxpayers to settle their taxes with convenience. Residents can also process their business permit renewal online or by visiting sites placed in the city’s malls.

Residents may also soon contact the city government by sending a message through “Lets Connect Txt MJS” to immediately report different incidents to them, Sandoval said.

Sandoval said that the city employees will also have increased salaries while 60 closed-circuit television cameras (CCTV) will be installed in different barangays to ensure the safety of the residents.

After her accomplishment report, the mayor also signed a memorandum of understanding with Senior Supt. Rodrigo Reyes of the Bureau of Fire Protection-National Capital Region and Supt. Josephus Alburo, city chief fire marshal, for the establishment of the city’s central fire station in Barangay Potrero.

She also led the inauguration of four 4×4 Hilux pick-up trucks which the Malabon City Disaster Risk Reduction and Management Office can use in emergency and disaster response.