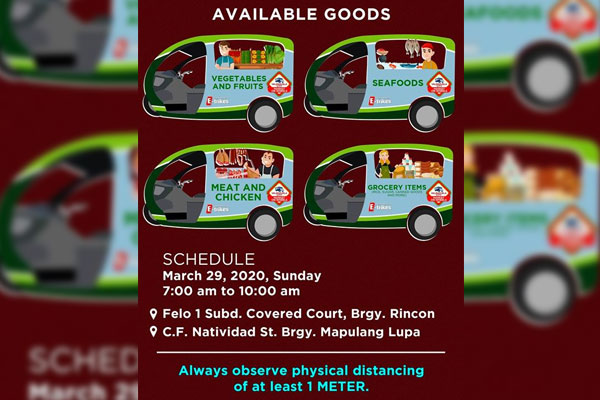 Valenzuela City is se to launch its “Market on Wheels” Sunday to bring basic goods, closer to its residents.

Under the program, the local government can also “lessen the people in the markets during the community quarantine period,” the Valenzuela public information said.

Using four units of electric tricycles, personnel from Valdeco Greenleaf Market will be bringing vegetables and fruits, seafood, meat, chicken, and grocery items from the market to Barangay Rincon and Mapulang Lupa.

According to Valenzuela City Mayor Rex Gatchalian, he got the idea from the initiative of the local government of Pasig City. “We’re rolling it [Market on Wheels] out na. Thanks for your idea! We tweaked it a little lang just to adjust to our terrain na small roads, but the overall concept is the same. Thanks for your concept!” Gatchalian told Pasig City Mayor Vico Sotto in a Twitter post.

Sotto replied: “Solid ‘to! I will show the team who designed ours. It will be a big morale booster for them!” Sotto also said that he will “continue to copy a number of” Valenzuela’s best practices, which includes the distribution of goods for families affected by the enhanced community quarantine.