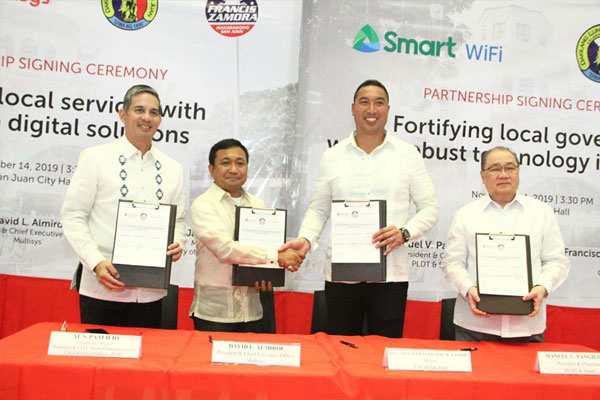 San Juan City has launched a mobile app that will help residents access the services offered by the local government.

Mayor Francis Zamora led the launch of the “Makabagong San Juan” app which would allow residents to pay for their utility bills, and receive important announcements and notices from the city government.

Moreover, the public could also use the app to call for emergency assistance and report accidents or other incidents.

Hotlines for local and national government offices will also be available in the app.

“We are now bringing the city government closer to San Juaneños by digitalizing local government services,” Zamora said in a statement.

“This is another step closer to the realization of our vision to make San Juan a Smart City, a Makabagong San Juan,” he added.

Zamora, together with Philippine Long Distance Telephone Co. (PLDT) chairman and CEO Manny Pangilinan and Multisys Solutions CEO David Almirol, signed a Memorandum of Agreement (MOA) on Thursday afternoon which seeks to improve the ease of doing business in the city and provide access to the services of the local government.

Electronic kiosks stationed on key areas in the city will also allow residents to pay for their utility bills. The kioks will also provide access to e-services of the local government such as application for business permits and licenses, and Real Property Tax (RPT).

Making San Juan a “smart city”—by installing free internet connections on key WiFi zones in the city and by providing access to government services through a mobile app—was one of promises made by Zamora during his campaign.

“We are happy to work with the San Juan City government in realizing their smart city vision,” Pangilinan said.

“We look forward to helping Mayor Francis Zamora further enhance his government’s ability to respond even more efficiently to the needs of his constituents and elevate San Juan to be at par with other modern cities in Asia and the world,” he added.