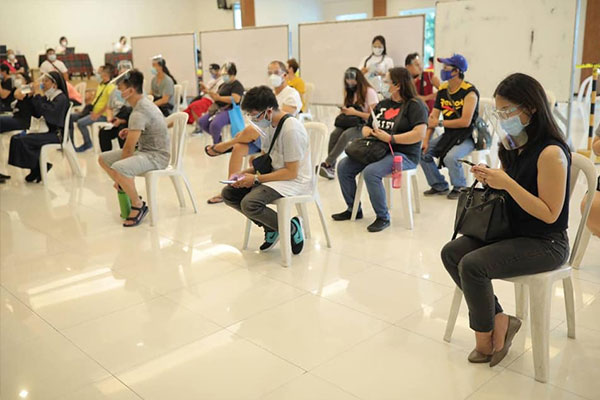 The Quezon City government’s vaccination program surpassed its own record of administering vaccines to 37, 234 individuals yesterday, the highest number among all local government units nationwide.

This new achievement comes after the city government inoculated around 27,000 individuals for three consecutive days last week from June 17 to June 19.

Mayor Joy Belmonte welcomes this achievement as a boost to the commitment of achieving population protection in around 6 months.

“This is a big step in a ladder that we are climbing. With continued collective efforts from the city government, private sector, and other partners, we will soon achieve protection for most of our citizens,” Mayor Belmonte said.

The QCProtektodo Vaccination Program has administered a total of 646,043 vaccines as of June 21. Out of this number, the first doses given are at 495,490 or 29.15% of the target 1.7 million population to achieve population protection, while 150,553 or 8.86% of the same target population have received their second doses.

The vaccination program continues to expand with sites now located in 50 different areas including the SMART Araneta Coliseum, the largest vaccination site in the city. Other sites were established in schools, hospitals, malls, drive-thrus, clubhouses, barangay halls, and even the city hall compound with partnerships with universities, private companies, malls, medical teams, and church organizations like the Diocese of Novaliches and Cubao.

Apart from members of A1 to A3 priority groups, the Quezon City government is now administering vaccines to members of the A4 group since the celebration of Labor Day last May 1, including 1,851 tricycle drivers who are members of Tricycle Operators and Drivers’ Associations (TODA) who are inoculated via drivethru vaccination.

Last week, “Bakuna Nights”, the city’s nighttime vaccination rollout, was launched inside the city hall compound accommodating workers from different industries such as banks, fast-food companies, delivery services, among others. During the four-night rollout, 6,327 were accommodated, and provided with free entertainment.

QC Task Force Vax to Normal Co-chair Joseph Juico said that the local government is confident that population protection can be achieved within the year as long as vaccine supply is stable.

“The achievement of more than 37,000 is proof that we can do so much as long as we have a large supply of vaccines. We are sure that once supply becomes consistent, we can do so much more in a day,” Juico said.

Juico also added that the vaccination task force is also studying ways to further improve and expand its efforts.

“It is a work in progress and we will not stop improving our systems. We will work towards one goal: population protection,” Juico said.