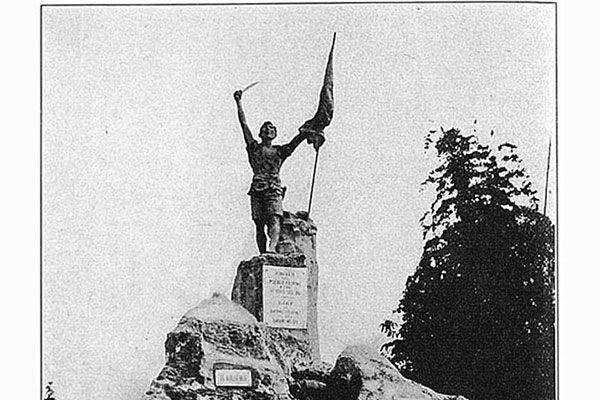 As the nation marks on Monday the 125th anniversary of the "Cry of Pugad Lawin," formerly called the "Cry of Balintawak”, it is also worth recalling how the “First Cry” monument was relocated from its original site in Balintawak to the University of the Philippines (UP) campus in Diliman, Quezon City in 1968 or 53 years ago, according to a report by Philippine News Agency.

The so-called "Cry" of Pugad Lawin or Balintawak is considered as the beginning of the Philippine revolution against more than 300 years of Spanish occupation.

As part of such recollection, it is also worth mentioning the important but little-known role played by the late former National Historical Commission (NHC) Chairman Carmen Guerrero Nakpil and the late former UP President Carlos P. Romulo in the transfer of the said monument from the original place, where it was inaugurated on Sept. 3, 1911, as a tribute to the heroes of the revolution launched by the "Katipuneros" led by Andres Bonifacio, among many others, on Aug. 23, 1896.

Historians say the “Cry” monument was considered as the first national memorial for Bonifacio and his men prior to the erection in 1933 of the imposing Bonifacio monument at the intersection of Epifanio de los Santos Ave. (Edsa), MacArthur Highway, Rizal Ave. Extension, and A. Samson Road in Grace Park, Caloocan City.

The monument in Balintawak was inaugurated in 1911 and as such, it used to serve as the site for the annual celebration of the Cry of Balintawak every Aug. 26 until 1962, when it was moved to Aug. 23. The name of the event was also renamed as the Cry of Pugad Lawin.

In 1968, the then Bureau of Public Highways (BPH), the predecessor of the present Department of Public Works and Highways (DPWH), removed the “Cry” monument to give way to the widening of Edsa and the construction of the present Balintawak Cloverleaf Interchange.

The cloverleaf interchange construction was necessitated by the extension of the then Manila North Diversion Road (MNDR), which was inaugurated by then-President Ferdinand Marcos in 1966. It originally covered a length of 36 kilometers from Balintawak to Tabang, Guiguinto, Bulacan.

MNDR was the original name of the present North Luzon Expressway (NLEX), which stretches from Balintawak to Dau, Mabalacat, Pampanga.

Not many people, particularly those born after the 1972-1981 martial law of the late President Marcos, are aware of how the “Cry” monument was transferred to Diliman from Balintawak after it was dismantled from its location, and this article is written for them.

One afternoon in August 1968, while this writer was on my way from Novaliches to the editorial office of the defunct Philippine News Service (PNS) at the second floor of the National Press Club (NPC) building along Magallanes Drive in Intramuros, Manila, I noticed that the dismantled monument was just dumped together with a heap of garbage near the temporary field office of the BPH in what is now known as Camachile area in Balintawak. PNS was the predecessor of the present Philippine News Agency or PNA.

Newsman instinct told this writer to do something about what happened to the monument. I alighted from the public utility jeepney I was riding and took a photo of the monument along with the pile of garbage, using an Instamatic camera, the popular model at that time.

At the PNS office, I requested the photo laboratory man to develop the photo while I was writing the corresponding story.

The photo of the dismantled monument was published on the back page of the defunct Daily Mirror, the then afternoon daily of the old Manila Times Publishing Co. Inc. It caught the attention of Mrs. Nakpil who contacted the PNS office through the telephone to get additional details.

Since this writer was the source of the photo and the story, the phone call was referred to me by the duty editor. I talked briefly with the NHC head, narrating to her the circumstances behind the removal of the monument from its original location. She promised to do something about it.

This writer learned later that she discussed the matter with Gen. Romulo, who agreed to relocate the monument at the University of the Philippines Diliman campus, in front of the UP Vinzons Hall.

The relocated monument was inaugurated on Nov. 29, 1968, as the Balintawak Cloverleaf Interchange was undergoing construction.

Meanwhile, it was learned that when the said interchange was made in the 1960s, the Homenaje was unfortunately dumped on the roadside.

"This prompted the Upsilon Sigma Phi fraternity of the University of the Philippines to troop to Balintawak and recover the 1911 monument in 1968. They placed the monument in front of the Vinzons Hall on the campus," a report said.