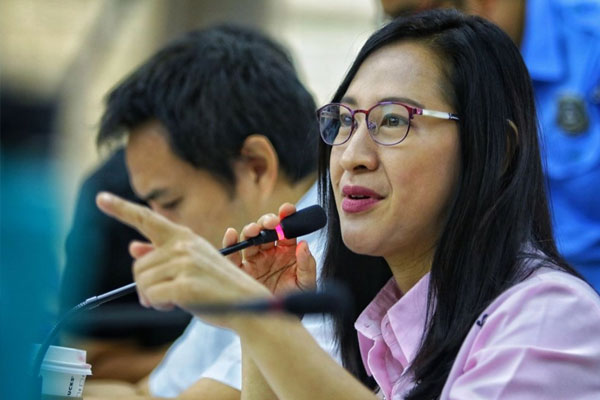 Belmonte to meet with LGBT community in QC

Quezon City Mayor Joy Belmonte will meet on August 16 with the members of the Quezon City Pride Council (QCPC) to ensure that the Gender Fair Ordinance is properly implemented in the city.

Belmonte said she will discuss programs that will strengthen the LGBTQIA (lesbians, gays, bisexual, transgender, queer, intersexuals, and asexual) group leading towards their protection from all forms of harassment and discrimination.

Belmonte said she called the meeting after the controversial incident involving transwoman Gretchen Diez, who was humiliated at a mall in Cubao for using a toilet for females.

“Makasisiguro kayo na lalo pa nating paiigtingin at pagbubutihin ang pagpapatupad ng Gender Fair Ordinance para hindi na maulit ang diskriminasyon na naranasan ni Gretchen Diez (The LGBT community can be assured that the Gender Fair Ordinance will be fully enforced to prevent the incident that happened to Gretche Diez),” said Belmonte.
Aside from the establishment of gender-neutral toilets, the meeting will tackle other ways to ensure that the rights of LGBTQIA are respected, including gender sensitivity training workshops for private offices and establishments.

Earlier, Belmonte strongly condemned the discrimination suffered by Diez in the hands of a mall employee.
Diez was forcibly pulled out by the said employee from a comfort room for women and charged her with unjust vexation. She was taken to the QC Police District 7 but was later released.

“We condemn this kind of discrimination towards members of the LGBTQIA community,” said Belmonte.

Belmonte said the incident should not have happened due to the existence of the Gender Fair Ordinance that prohibits all forms of discrimination against the LGBTQIA sector.

Quezon City takes pride in being one of the first cities to pass a Gender Fair Ordinance to protect the rights of the LGBTQIA .