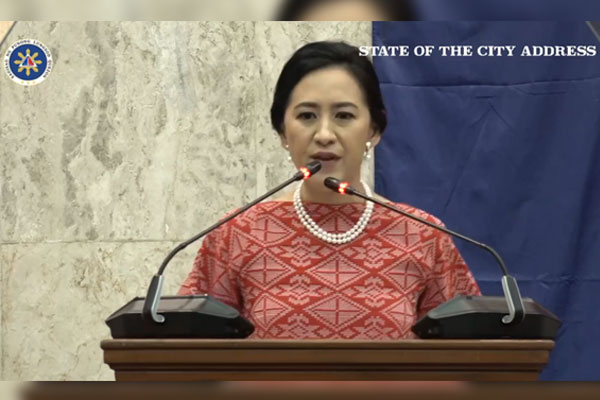 In her first state-of-the-city address (SOCA) on Monday, Belmonte detailed her administration’s achievements, starting with President Duterte’s order of clearing all government properties from all forms of obstructions.

Stressing that her administration went “above and beyond” what was expected of them by Department of the Interior and Local Government (DILG) in its road clearing operations, Belmonte said the city passed the test with a respectable rating.

However, Belmonte said that she was not authorized to disclose what the DILG rating for Quezon City was.

Insisting the “buck never stops here”, Belmonte has vowed to sustain the DILG’s order way beyond the two month deadline it has imposed  on the clearing of obstructions on public lots.

With regards the ASF outbreak, Belmonte admitted it to be a pressing issue that was way beyond their initial expectations, but also noted that ample actions were undertaken to keep the situation from further worsening.

Insisting that Quezon City is an urban locality, Belmonte said her administration had to contend with thousands of illegal backyard piggeries in the city striking a balance of enforcing what is lawful and ensuring that the affected personalities are given alternative livelihood or are provided with financial assistance to tide them in these trying times.

Bombarded by the Department of Agriculture (DA) for her ASF declaration in the city last month, Belmonte said she stood pat on her decision to prioritize eliminating the disease at the soonest possible time.

Her prompt announcement according to Belmonte  was meant to empower the people with the information they need to avoid spreading the disease.

A total of 4,466 pigs have been culled in the city as the city government had provided a total of P13.3 million in financial assistance to affected hog raisers.

Earlier, Belmonte gave backyard piggery owners until February 2020 to operate or face sanctions and charges if they fail to comply.

In her first three years in office, Bemonte has vowed to prioritize the delivery of social services, enforce a centralized governance and the shift to automation in government transactions.

Belmonte, despite what she described as “unforeseen obstacles’’, gave her performance a grade of 90 out of 100.

Having a soft spot for the poor, Belmonte said 2,250 vendors were registered that would allow them to lawfully ply their trade while clearing public properties from obstructions.

She noted the move encouraged the vendors displaced by the clearing operations to vend inside public markets or in alternative vending sites that do not obstruct roads.

The relocated vendors were profiled, registered and provided with identification cards to legitimize their trade.
Belmonte said the number of registered vendors rose from 950 when they took over to 3,200 at present.

Aside from this, Belmonte reported that an ordinance was filed that raises the financial assistance for fire victims to P10,000, from P2,000 which had remained for 20 years.

Belmonte also is batting for the raise of burial assistance from P10,000 to a full package of P25,000 while the death benefit assistance worth P5,000 extended to family members of deceased senior citizens would be distributed within the month, clearing the backlog originating from 2017.

To facilitate benefits of senior citizens, the processing of over 6,500 indigent social pension applications who are entitled to the assistance from the Department of Social Welfare and Development (DSWD) will soon be made available at barangays.

Belmonte noted under this system the applicants will no longer be  inconvenienced to go to city hall to process their clams.

With an estimated 215,000 informal settler families in Quezon City Belmonte aims to address this woes by putting in place a new shelter plan where the city government plans to purchase lands where new communities will be built.

To further explain, Belmonte said the scheme was modeled after Singapore which includes the construction of mid- to high-rise buildings with various payment options for the units.

She added 429 beneficiaries had been awarded titles under the local government’s direct sale program and community mortgage program, with more to be awarded in the following months.