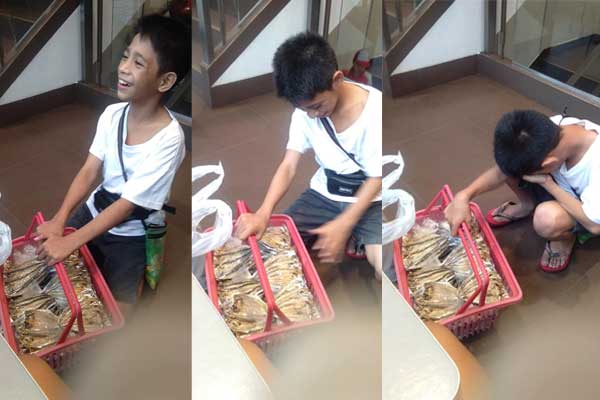 A boy’s determination to study and help his family has caught netizens’ admiration, as photos of him went viral on social media.

Lance Abarquez is a young vendor of dried fish and tinapa (smoked fish) in Pateros. Everyday, he walks from his home in Gawad Kalinga, Santa Ana Village, heading downtown.

Jewel Rashia, 17, was with her mom Agnes when they encountered Abarquez inside a fast food chain in Pateros on Saturday, Sept. 14.

Jewel’s mom noticed Abarquez who was then selling his goods to the fast food customers downstairs, and she told her, “Anak, tignan mo ‘yung bata oh, nagtitinda ng tinapa tapos kayo puro hingi lang ng pera.” (My child, look at that kid, he is selling tinapa while you and your siblings only always ask me for money.)

After a few minutes, Abarquez went to the second floor of the establishment, and approached Jewel and her mom, who were eating near the stairs. They were impressed by his sales pitch which sounded like a commercial ad when he offered them the goods.

Jewel’s mom took the time off to talk to the boy while choosing among the dried fish and tinapa.

Abarquez told them that his mom had already passed away, and he is now taking care of his sick dad. He is currently in 6th grade and his aunt helps him pay for his studies. These were the reasons why he decided to sell dried fish and tinapa – to earn enough money to buy his dad’s medicines, and for his school expenses.

(Even though the fish are heavy, he endures it. He goes far just to sell all of it.)

(You can really see that the kid is eager to pursue his studies and help his family even at such a young age.)

Moved by the boy’s humility and hard work, Jewel took the chance to capture some photos of him and posted it on Facebook. Her post has garnered over 20,600 reactions, 13,000 shares, and over 4,600 comments expressing admiration from netizens, as of this writing.