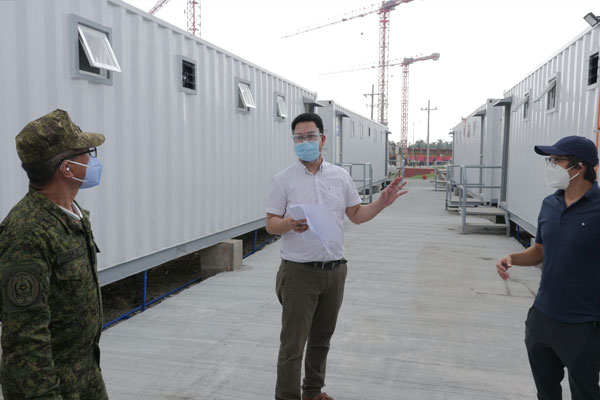 The Solaire-Pagcor Mega Quarantine Center at the Bagong Nayong Pilipino in Parañaque City, funded by the Razon Group, was inaugurated on Tuesday along with a newly-constructed access road completed by the Department of Public Works and Highways (DPWH).

Dizon assured those who would be confined in the facility that the government will take care of them.

“Patients should not worry about their stay in the facility, it’s only 14 days. All of their needs will be provided by the government. What is important is for them to get well for their families,” he said during a press briefing.

Dizon, also the country's testing czar, added that the government did not spend much on the project as the majority of the construction expenses were shouldered by the private sector.

“The DPWH spent only on the road leading to red zone inside the compound,” he said.

Aside from being air-conditioned, Dizon added that the facility also has a Wi-Fi connection.

“We have installed Wi-Fi so that patients will not get bored. They can watch Netflix and go online on social media,” he added.

The facility has a 600-bed capacity for mild and asymptomatic coronavirus disease (Covid-19) patients with mild and no symptoms.

It was built in less than two months and will be manned by the Armed Forces of the Philippines Health Service Command and is being eyed to be operational by November.

The DPWH is working on the construction of a total of 603 isolation/quarantine facilities for Covid-19 patients/suspects nationwide with a total of 21,609-bed capacity, as well as 75 off-site dormitories for medical workers with 1,806-bed capacity.

It also provided technical assistance to a total of 11 facilities implemented by the private sector and/or LGUs.

Meanwhile, the virtual reporting tour is the newest interactive online platform of the Presidential Communications Operations Office (PCOO) that would allow the local and international media, and the public to experience first-hand the situation on the ground while avoiding the risks brought by the virus.

It is organized by the team that pioneered the first virtual presser in the country, the PCOO-Office of the Global Media and Public Affairs (OGMPA), in partnership with the Radio Television Malacañang (RTVM).

“The Covid-19 pandemic has affected most the operations and the engagements with the media--this includes the PCOO's Global Media Reporting Tour. The Virtual Reporting Tour (VRT) will enable us to continue engaging the media and facilitate their coverage of relevant stories while ensuring their safety,” said PCOO Secretary Martin Andanar in a statement.

He added that the virtual reporting tour will allow participants to witness for themselves the situation on-the-ground.

"In the instance of the upcoming virtual reporting tour, they will see the government's actual responses and the unwavering commitment of the Duterte administration in fighting Covid-19,” he added.