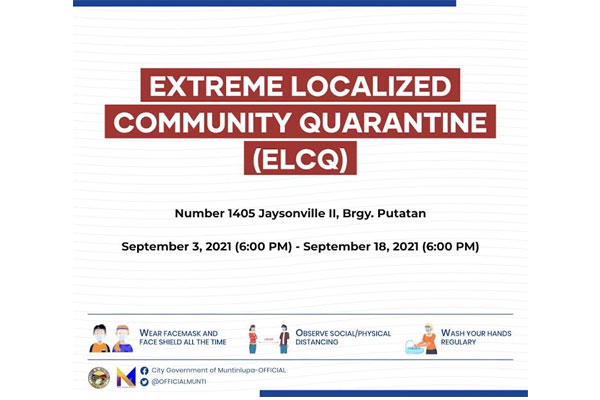 Muntinlupa places another community under lockdown

Areas under granular lockdown in Muntinlupa climb to 15 as another community in Brgy. Putatan has been placed in tighter quarantine status.

From one confirmed case last week, the number of residents who tested positive for COVID-19 in the community through an RT-PCR test has climbed to 10. According to Muntinlupa CHO, the attack rate in the area is at 4,761.90 per 10,000 population with a very narrow case doubling time of two days.

The community comprises of 21 residents belonging to six households. Of the total population, there are 2 senior citizens, one PWD, at one aged 0-5 y/o.

At least 47 new confirmed cases were recorded in the two areas in just one week with a very narrow case doubling time of 2 days. The two communities haven’t logged any COVID-19 case from the previous week.

Brgy. Poblacion capt. Allen Ampaya earlier coordinated with CHO following the reports of COVID-19 cases in the areas. The barangay has undertaken local quarantine protocols for the communities and has provided food packs prior to the imposition of ELCQ.

Muntinlupa CHO is set to conduct a mass swab testing in the affected areas while Muntinlupa PNP is set to enforce total lockdown measures. The City Social Service Department and Barangay will also provide food packs and other basic items for the affected residents during the effectivity of the ELCQ.