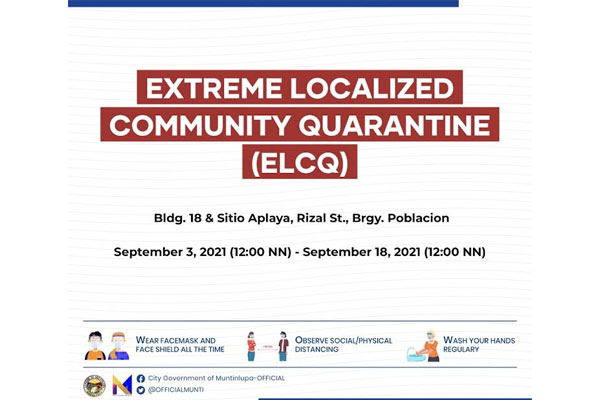 Recording more than 40 new confirmed cases in just one week, two areas in Brgy. Poblacion in Muntinlupa have been placed under granular lockdown, adding to the growing number of areas in the city under the stricter quarantine status.

The local health office also noted that the areas to be put on lockdown have a very narrow case doubling time of 2 days, or the number of days for COVID-19 cases to double in number.

Brgy. Poblacion capt. Allen Ampaya earlier coordinated with CHO following the reports of COVID-19 cases in the areas. The barangay has undertaken local quarantine protocols for the communities and has provided food packs prior to the imposition of ELCQ.

Muntinlupa CHO is set to conduct a mass swab testing in the affected areas while Muntinlupa PNP is set to enforce total lockdown measures. The City Social Service Department and Barangay will also provide food packs and other basic items for the affected residents during the effectivity of the ELCQ.

To date, there are 14 area in the city to have been placed on lockdown starting August.