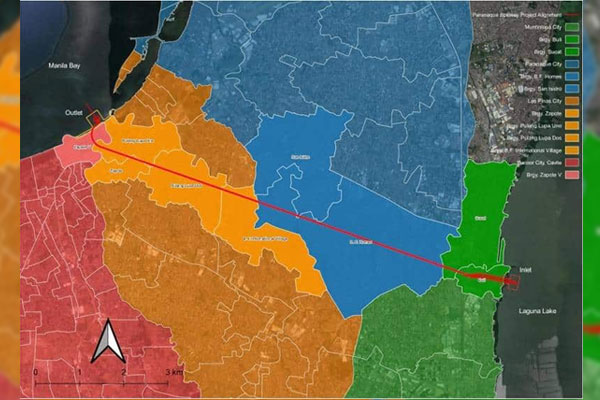 The Muntinlupa City Council conducted a public hearing with the Department of Public Works and Highways (DPWH) on the Parañaque Spillway Project aimed at reducing the inundation damage at the Laguna lakeshore area and in controlling the water level,  according to a report by Manila Bulletin.

The Parañaque Spillway Project, as proposed by the DPWH, will traverse the cities of Muntinlupa, Parañaque, Las Piñas, and Bacoor City in Cavite and designed to drain excess water from the Laguna Lake into Manila Bay by constructing an underground drainage channel to control the water level of Laguna Lake.

The route of the Parañaque Spillway Project from Muntinlupa to Bacoor (Photo from DENR-EMB’s Project Description for Scoping document)
Based on the project description posted on the Department of Environment and Natural Resources’ Environmental Management Bureau website, “The intake facility consisting of the jetty, open channel, and inlet gate will be constructed in Brgy. Buli, Muntinlupa City.”

“The spillway connecting Laguna Lake to Manila Bay will be constructed underground and will pass through the private roads in barangays B.F. Homes and San Isidro in Paranaque City, barangays B.F. International Village, Pulang Lupa Uno Dos, Zapote, and Pulang Lupa Uno in Las Pinas City, and in Barangay Zapote V, Bacoor City,” according to the document.

It added, “The spillway will be constructed 50 to 77 meters below the ground. The drainage facility will be installed in the proposed reclamation area within the coastal water of Manila Bay in Brgy. Zapote V, Bacoor City.”

Based on the project description submitted to the Muntinlupa City Council, the entire project will be constructed in 124 months or 10.3 years.

Muntinlupa Mayor Ruffy Biazon also attended the hearing and said the welfare of the residents of Barangay Buli is important and a thorough study of the project is needed.

“Yesterday, we conducted a hearing with DPWH and the members of the city council expressed reservations on the project as it will directly affect residents of Barangay Buli. The objective of the project is to drain excess water from Laguna de Bay to Manila Bay to reduce flooding around Laguna de Bay areas,” he said.

He said the project’s name is a misnomer as it will traverse Muntinlupa, Las Pinas, Paranaque and Bacoor, “hence it is not ‘Paranaque spillway.’”

“I clarified with the DPWH that prior endorsement of the City Council is a necessary requirement before the project can proceed and this was answered in the affirmative. Besides, the three other LGUs have yet to endorse the project. We will continue our dialogue with DPWH to address our concerns,” he said.