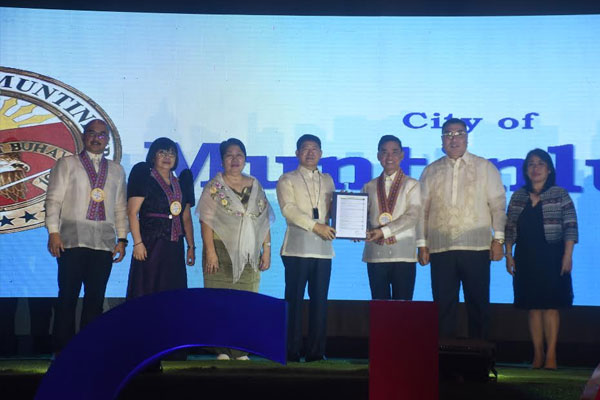 The Department of the Interior and Local Government (DILG) recognized the city government of Muntinlupa as one of the 2019 Seal of Good Local Governance (SGLG) awardees for its excellent delivery of public service.

Despite having a more stringent assessment criteria for the award, the City of Muntinlupa has passed “all-in” seven assessment areas in governance namely: Financial Administration; Disaster Preparedness; Social Protection; Peace and Order; Business Friendliness and Competitiveness; Environmental Protection; and Tourism Culture and the Arts.

Muntinlupa City was among the 380 local government units (LGU) in the country conferred with the coveted award in governance. In NCR, only eight (8) LGUs received this year’s Seal including the cities of Caloocan, Malabon, Mandaluyong, Navotas, Pasay, Quezon City, and San Juan.

Fresnedi thanked the DILG for its recognition of Muntinlupa’s commitment in improving local administration and service delivery for Muntinlupeños.

“We are honored to receive this award as it validates our efforts towards local governance reforms and development. This recognition is an outcome of the collective efforts of dedicated city officials and employees who tirelessly worked in facilitating a transparent, caring, and accountable government for the people,” the local exec said.

As an incentive, 2019 SGLG recipients are set to receive Performance Challenge Fund (PCF) to finance local development projects and capacity development assistance from the DILG.

SGLG is the DILG’s progressive assessment and reward system that gives LGUs distinction for their remarkable performance across various pillars. This year’s award is the second SGLG award conferred to Muntinlupa City after receiving the same recognition last 2015.

DOH conferred the local government of Muntinlupa with Best in Rabies Prevention and Control Program, Best in National Voluntary Blood Services Program, and Plaque of Appreciation for the implementation of the Universal Health Care.

The City of Muntinlupa is set to order an additional 200,000 doses of COVID-19 vaccine from AstraZeneca as more local government units in the country sign a purchase deal with the British pharmaceutical firm and the national government. Mayor Jaime ...