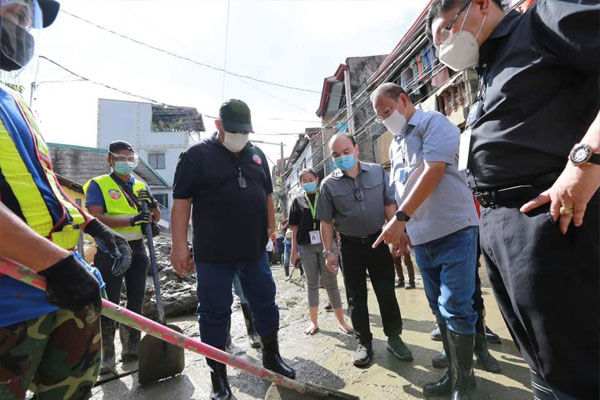 The Metro Metropolitan Manila Development Authority (MMDA) on Tuesday delivered 2,000 relief packs to the typhoon-hit Marikina City, according to a report by Manila Bulletin.

The donations coursed through the MMDA were from Philippine Hardware Foundation, Inc. and St. Stephen High School Alumni Association, Inc.

Lim and Teodoro also went around the city and handed out face masks and shields, and relief bags containing canned sardines, noodles, and bottled water.

The MMDA chairman has vowed to provide any assistance to the city government of Marikina as it strives to restore sense of normalcy.

Aside from the relief packs, the MMDA has sent composite teams and deployed heavy equipment to help in clearing operations.

“We are more than willing and ready to aid Marikina in going back to normal by helping in their clearing operations and providing food packs to its residents,” said Lim in a statement.

For his part, the Marikina mayor said the assistance given by the MMDA at the onset of the typhoon is very timely and helpful, resulting in a swift disaster response.

“Our goal is to clear our roads faster than what we did during Ondoy. The city is closely coordinating with concerned agencies to bring back economic opportunities for the people of Marikina,” Teodoro said.

The mayor thanked the MMDA for its aid to the city, saying that MMDA was one of the first responders in rescue and evacuation operations in Marikina.

Among the cities of Metro Manila, Marikina was severely battered by Typhoon Ulysses, causing massive flooding all over the city.