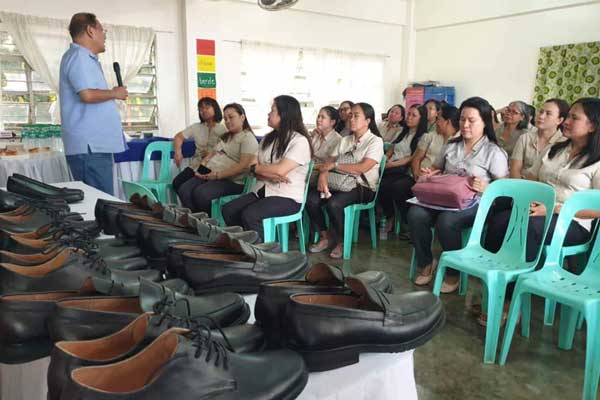 All public school teachers and non-teaching personnel in Marikina City will receive leather shoes from the city government, according to Marikina Mayor Marcelino "Marcy" Teodoro.

Teodoro said the giving of pair of shoes for each of the city’s 2,681 and 165 school personnel was in recognition of their hard work to nurture the minds of their students.

"Our teachers are our second parents. Walang sawa silang nagtuturo at nagpapasensya sa ating mga anak upang maturuan sila at magkaroon ng magandang buhay balang araw (They patiently teach our children so that they will have bright future),” Teodoro said in a statement.

The two shoe companies have prepared three styles of black leather shoes female teachers can choose from and also two varieties of shoes for male teachers and non-teaching personnel.

Dr. Elisa Cerveza, Marikina Schools Division assistant superintendent, said it is the first time that teachers will be given shoes by the city government since she started teaching in the city.

Teachers, according to her, are very elated when they learned that Teodoro made a directive to give them a pair of black leather shoes each, saying they felt appreciated and loved by the local government.

She said the non-monetary support of Marikina City government would boost the morale of the teachers and would inspire them to work harder.

Teodoro earlier distributed free school uniforms to about 5,700 kinder students in the city with each of them getting two pairs each in an effort of the local government to ease burden of parents.

The students have also been given three big colorful storybooks so that parents may read these to their children.

Teodoro told parents that it is important for them to spend time with their children while they are still young.