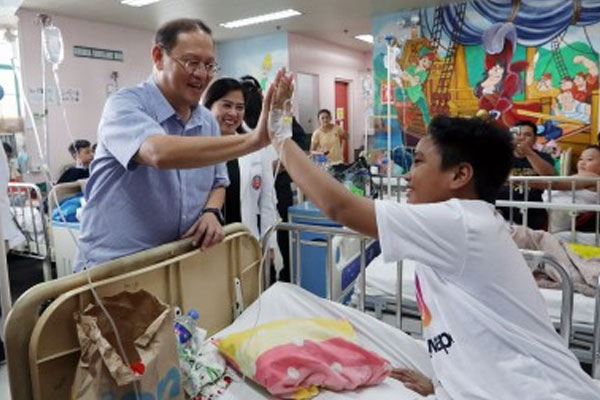 This is aside from the regular conduct of clean-up at waterways like canals, esteros, and other places where mosquitoes can breed.

Teodoro also encouraged parents, whose children have fever, to visit the nearest health center and avoid death caused by dengue which he believed may be prevented with early detection.

The second-term mayor also advised students to wear long socks and clothes that will protect them from dengue-carrying mosquitoes. He also told them to use mosquito repellants.

On Wednesday, Teodoro visited the 26 dengue patients confined at ARMMC to check their health status. Two of the patients are from Marikina, while most of them are from Rizal.

The local chief executive talked to Dr. Imelda Mateo, ARMMC director, during his visit to know the condition of dengue patients in their hospital.

"I told the director of the hospital to accommodate all dengue patients, even they are not residents of Marikina City," Teodoro said.

"Also, told the hospital administrators to take good care of the dengue patients and to strictly monitor their conditions, and to provide all necessary help that they could give," he added.

Teodoro met with the families and dengue patients staying at the dengue ward of the ARMMC, and assured them that they will receive proper medical care.

The patients and their families thanked Teodoro for visiting and checking on their condition.

Health Secretary Francisco Duque III said it is important to declare a national dengue epidemic "to enable the local government units to use their Quick Response Fund to address the epidemic situation."