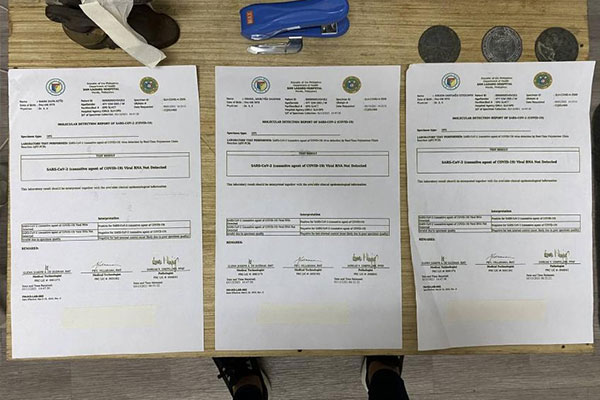 Philippine National Police (PNP) chief Gen. Guillermo Eleazar on Tuesday lauded the Manila Police District (MPD) for the arrest of two persons allegedly involved in the manufacturing and sale of fake vaccination cards and negative coronavirus disease 2019 (Covid-19) swab test results in a recent operation in Quiapo, according to a report by Philippine News Agency.

The MPD identified the suspects as Jimmy Santisima and Edito Pan, who were arrested last Sept. 3.

The operation stemmed from an intelligence report about a shop in Quiapo which has been selling fake vaccination cards and negative reverse transcription-polymerase chain reaction (RT-PCR) test results.

During the raid, MPD personnel discovered the computers used in the illegal activity and the template for the fake swab test results from San Lazaro Hospital and vaccination cards from Pasay City.

The suspects are also alleged to be involved in making fake birth certificates and other documents as the raiding teams also found some fake dry seals of universities and government agencies.

The suspects were taken to the MPD headquarters and are now facing appropriate criminal charges.

A negative RT-PCR test result is among documents required by local government units (LGUs) from travelers entering their respective areas.

Meanwhile, some LGUs also require a vaccination card for travelers while some business establishments are also offering discounts and other privileges for those who have been vaccinated against Covid-19.