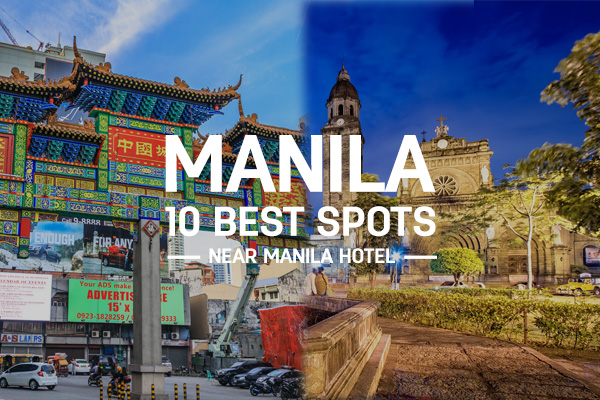 When you hear the words “historic” and “hotel” in the same sentence, a few places come to mind. Among these places is Manila Hotel, a 570-room five-star hotel on the coast of Manila Bay. Built on 35,000-square-meters of reclaimed land, Manila Hotel’s place in Philippine history was secured when it opened its doors on the commemoration of the independence of the United States on July 4, 1912, and when it served as the residence of General Douglas MacArthur during his stint as the military advisor to President Manuel Quezon’s Philippine Commonwealth from 1935 to 1941.

The National Planetarium, owned and operated by the National Museum of the Philippines in Manila, is a mainstay of many school field trips – when it’s not undergoing renovations, that is. Regardless of its state, the planetarium is a sight to behold, with its 16-meter dome jutting out the perimeter of Rizal Park, between the Japanese Garden and Chinese Garden on Padre Burgos Avenue.

Since opening its doors in 1975, the National Planetarium has filled hundreds of thousands of students and other visitors with wonder and delight, thanks to its 310-person seating capacity and its starball projector.

In 2012 alone, the planetarium attracted more than 40,000 visitors, mostly students from Metro Manila and nearby areas.

How to get there: From Manila Hotel, cross Bonifacio Drive to the side of Intramuros Golf Club, cross Padre Burgos Avenue, and then walk about 200 meters to destination. Or cross Katigbak Parkway to the side of Luntiang Pilipinas Forest Park, cross Roxas Boulevard, and then walk down Padre Burgos Avenue about 200 meters to destination.

Another attraction that’s literally a stone’s throw from Manila Hotel is Rizal Park and the memorial built to commemorate National Hero Jose P. Rizal. No other structure in the park attracts as much attention as the Rizal Monument.

The monument features different elements, including a standing bronze sculpture of Rizal, and an obelisk, all of which set on a stone base that serves as the final resting place of the hero’s remains. On the front side of the monument is a plaque that partly reads: “To the memory of Jose Rizal, patriot and martyr, executed on Bagumbayan Field December Thirtieth 1896.”

The monument is constantly guarded by the Philippine Marine Corps.

Despite being located in what was once Bagumbayan Field, the Rizal Monument was not the spot where he was executed. You have to walk about 100 meters north-northwest of the monument to find the spot. The area is easy to spot, though, thanks to the life-size diorama depicting Rizal’s final moments.

Manila Ocean Park is the Philippines’ first world-class marine theme park. Its main attraction is the Oceanarium, which is home to 14,000 marine creatures from around 277 species indigenous to the waters of Southeast Asia. This oceanarium has seven sections with 3,000 cubic meters of filtered Manila Bay water,  and a 25-meter 220-degree curved walkway tunnel. Being an educational facility, too, the park has an educational activity area, functions rooms, and a shark and stingray viewing area.

Of course, what respectable marine theme park is complete without the different services offered to patrons. Manila Ocean Park has the Mermaid Swim Experience, where visitors can swim while wearing a mermaid costume, Sea Lion Show and All Star Bird Show, and Sharks and Rays Encounter.

How to get there: From Manila Hotel, walk down Katigbak Parkway towards Quirino Grandstand. It’s impossible to miss the huge archway leading into the park.

The Walled City, or simply Intramuros, is perhaps the most easily recognizable historical landmark in Manila. How can it not be when Intramuros was Manila during the Spanish Era, serving for about 250 years as the other half of the Manila-Acapulco trade. It was also the heart of the Spanish Empire in the Philippines, the center of education, religion, and economy.

Today, Intramuros is our window to the past, with its Spanish Era fortifications, which include the wall, enclosing the 0.67-square-kilometer area, and Fort Santiago, and buildings like the Manila Cathedral and San Agustin Church. It’s too bad most churches, universities, houses, and government buildings that date back to the Spanish Colonial Period were destroyed in World War II.

To maintain the historic walled city, and to an extent, rebuild and redevelop buildings, structures, and fortifications, the Philippine government created the Intramuros Administration in 1979.

If you are going to Intramuros, make sure to scale the wall by visiting San Diego Gardens and Baluarte De San Diego, and to walk down cobblestone streets – what remains of them.

The Minor Basilica and Metropolitan Cathedral of the Immaculate Conception, more popularly known as Manila Cathedral, is located within the historic walled city of Intramuros. The cathedral serves as the episcopal see of the Archbishop of Manila.

Oh, it wasn’t always a cathedral. When it was established in 1571, it was a parish church in Manila under the Archdiocese of Mexico. It became a separate diocese in 1579 upon the issuance of a papal bull by Pope Gregory XIII.

The Manila Cathedral you see today is actually the eighth one. All previous structures were either damaged or destroyed in wars or by calamity. Another papal bull, this time by Pope John Paull II, turned the cathedral into a minor basilica in 1981.

Not to be confused with all the other San Agustin churches across the Philippines, the San Agustin Church in Manila is located inside the historic walled city of Intramuros. Apart from being a UNESCO World Heritage Site, the church, completed in 1607, is the oldest church in the Philippines. The church is also a National Historical Landmark.

The San Agustin Church is designed after some of the beautiful churches built by the Order of St. Augustine in Mexico. The magnificent exterior of the church is mirrored in its interior, from the profile of the mouldings, rosettes, and sunken panels to the baroque pulpit, grand pipe organ, and antechoir with 16th century crucifix. Looks up in wonder at the 16 huge chandeliers from Paris, France.

San Agustin Church and its sprawling courtyard are located on General Luna Street, surrounded by cobblestone streets. The current structure is actually the third one built on the site. The first San Agustin Church, made of bamboo and nipa, was the first religious structure ever built by the Spaniards in Luzon. The second structure was made of wood, and was destroyed by fire in 1583. It was then that the Augustinians decided to build the third incarnation of the church using stone.

Fort Santiago is a citadel built by Spanish navigator Miguel López de Legazpi for Manila. The fortress sits at the mouth of the Pasig River, and is part of the structures of Intramuros. Apart from its significance in military history, it also served as the prison for Jose Rizal before his execution in 1896.

Today, Fort Santiago is the home to the Rizal Shrine, a museum that features memorabilia of the hero and patriot. The shrine also exhibits Rizal’s footprints, embedded into the ground in bronze, representing his final walk from his cell in Fort Santiago to Bagumbayan.

The citadel was named after Saint James, patron saint of Spain. During Spanish rule, the fortress also served as the main fort for the spice trade to the Americas and Europe, a role it filled for 333 years. Just like the rest of Intramuros, the walls of Fort Santiago are both high, at 6.7 meters, and thick, at 2.4 meters.

Museo Pambata is a children’s museum located in the former Elks Club Building at the corner of Roxas Boulevard and South Drive. Unlike other museums, where exhibits are behind glass or cordons, Museo Pambata encourages interaction, teaching children to navigate their surroundings and learn about the exhibits.

The museum was opened in 1994 as the lifelong dream, inspired by a visit to Boston Children’s Museum in the United States, of Nina Lim-Yuson, an early childhood educator and mother of four.

How to get there: From Manila Hotel, cross Katigbak Parkway to Luntiang Pilipinas Forest Park, walk down Roxas Boulevard, and then cross South Drive to destination.

Manila Bay is the gateway to the capital city of the Philippines, facilitating commerce and trade between the country and neighboring nations. During the Spanish occupation, it served Manila Galleons that traded between the Philippines and Acapulco, Mexico.

Apart from trade, Manila Bay was also the site of bloodshed. It was the setting for the Battle of Manila Bay of 1898, where the United States Navy destroyed the Spanish armada. Oh, there were other battles, mostly between the Spaniards and the Dutch, but we’d run out of space just listing them all.

Today, Manila Bay is the target of a massive rehabilitation program, which aims to clean up and revitalize the bay and prevent pollution from taking over again. With the help of volunteers, the Philippine government has in the first two quarters of 2019 rid the bay of tons upon tons of silt and waste.

One of the more memorable attempts at revitalizing Manila Bay was the Buhayin ang Maynila program, wherein the local government enhanced the seaside promenade of the bay through urban renewal, upkeep, and improvements. This program later gave birth to the Baywalk, a two-kilometer strip of public space between the bay and Roxas Boulevard that served as a venue for social interaction and recreation.

How to get there: From Manila Hotel, cross Katigbak Parkway to Luntiang Pilipinas Forest Park, walk down Roxas Boulevard to destination.