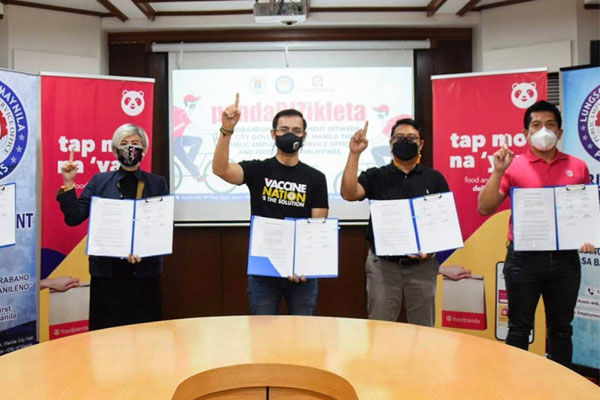 Under the program, about 30 beneficiaries will receive free bicycle units and safety gears donated to the Manila City government from the international relief organization Samaritan's Purse.

The beneficiaries will be go on board as freelance delivery bikers and will also receive P3,000.00 worth of FoodPanda rider kits consisting of uniforms, thermal box, thermal bag, and panda mask, free of charge.

Succeeding beneficiaries of the project will receive discounts for FoodPanda kits and an affordable installment.

Last year, FoodPanda and the local government also entered into a partnership for the pandaTODA project, which helped hundres of displaced tricycle drivers whilst the pandemic.

Marogy said they have partnered with Manila City as they recognize the local government’s efforts to boost the capital’s economic recovery, particularly for programs that would benefit Manileños.

“Manila has always been special to foodpanda. We are a proud partner and we are grateful to Mayor Isko Moreno for working with us once again to contribute to its economic recovery programs for the benefit of Manilenos,” Marogy said.

Domagoso also said that drivers are part of the A4 priority group, and they are encouraged to get vaccinated.

The pandaBIZikleta partnership of FoodPanda and Manila City will be administered by the Manila Public Employment Service Office (PESO), Manila’s arm for providing job opportunities to Manilans.

PESO-Manila Director Fernan Bermejo thanked FoodPanda Philippines for their continued support to the City and Manilans for giving job opportunities amidst the pandemic.

PESO-Manila will soon announce the requirements and other details regarding the application as beneficiary for the program.