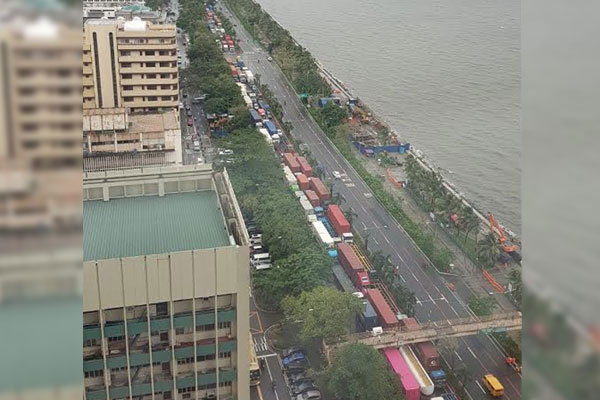 Following the traffic jam Friday morning caused by a queue of container trucks waiting to enter the Port of Manila, Manila Mayor Francisco “Isko Moreno” Domagoso is offering truckers a new route other than through Roxas Boulevard and Radial Road 10 (R-10).

Domagoso is advising them to instead pass through Divisoria and Jose Abad Santos Boulevard.

Trucks hogged most of Roxas Boulevard’s northbound lane after the Port of Manila ceased operations due to heavy rains, zero visibility and strong monsoon winds on Thursday night and much of Friday.

Acting port manager Eligio Fortajada explained, “The situation was beyond our control and nature played its part. We are not blaming anybody for this, but this is another lesson learned, and we hope to formulate measures that in the event it happens again, we now have an early solution.”

The mayor admitted it was a gamble opening up these routes for container vans. With roads around Divisoria having been cleared of vendors, heavy vehicles may now use this street.

However, he stressed that 10-wheelers can only use one lane of C. M. Recto Avenue, and that they should not cross over lanes designated for light vehicles, both private and public.

Trucks emerging from Port Area may pass through Del Pan, Recto and turn left at Abad Santos on the way to Rizal Avenue for those who are northbound.