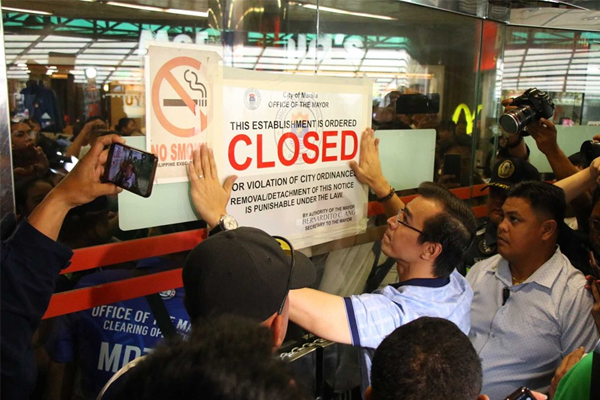 A workers group asked Manila Mayor Francisco "Isko Moreno" Domagoso to look after the welfare of employees of Isetann Mall in Recto which he ordered closed.

“We respect the executive judgment prerogative of Yorme Isko to shut down the entire operations of Isetann department store over the management’s non-compliance with city ordinances,” said Trade Union Congress of the Philippines (TUCP) President Raymond Mendoza in a statement.

“We support his bold resolve to address the city’s deeply-seated problems but we hope there’s a way forward to restore the jobs of Isetann employees or some kind of assistance for them while they have no income,” he added.

Mendoza noted that the employees are the ones who suffer the most due to the mall owners' failure to comply with city ordinances.

Among those economically affected by the closure order, he said are employees such as salesladies and rank-and-file who are covered by the ‘no-work, no-pay’ policy.

The labor group official, meanwhile, urged the Isetann management to immediately comply with requirements of the city ordinance in order to lift the closure ban and for workers to return to work.

“Because Isetann management did not abide with the law, the employees lose their salaries and wages. In this case, employees suffer the consequences of the management’s violation,” he said.

“We urge the Isetann management to immediately comply with the licenses and permits required by the city government needed for the resumption of mall operations so that all the employees can return to work,” Mendoza added.

According to Domagoso, Tri-Union Properties Inc., the owner of the mall, was operating as a lessor without the necessary business permit.