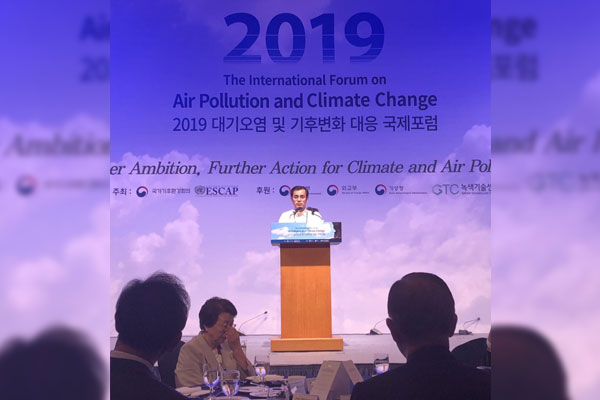 Manila Mayor Francisco “Isko Moreno” Domagoso wants to create more open and green spaces in Manila in line with the goal to make it a livable city by 2030.

“Air does not recognize political boundaries, whether we look at it from the country perspective or from the capital perspective,” Moreno said during the International Forum on Air Pollution and Climate Change in Seoul, South Korea.

“All of us suffer. All of us have to agree that the solution must be collaboration and cooperation of political entities,” he added.

Expressing support to attain the sustainable development goals (SGD) set by the United Nations General Assembly for 2030, Moreno assured that air monitoring in the city of Manila will become “a daily undertaking and strategic areas [will be] identified to comply with air quality standards.”

He added that the use of renewable energy will also be integrated in their developmental plans.

Moreno underscored that majority of air pollutants In the Philippines “came from mobile sources at 88 percent.”

“In the National Capital Region (NCR), mobile sources contributed an enormous 88 percent to total air pollution in the area compared to ten percent from stationary sources and a mere two percent from area sources,” he added.

Moreno admitted that the main challenge for Manila to create more green spaces is that “it is one of the densest cities.”

“So, one of our strategies will be through vertical gardening and roof gardens in key locations,” he added.

“Today we strive to achieve the vision to make the city a green city with well-connected and maintained forest parks, open spaces and water channels,” he said.

Moreno said that the city government aims to build and nurture a quality-enhanced environment to mitigate disaster risks and adapt to climate change through “establishing [some] 1,600 hectares of green spaces.”