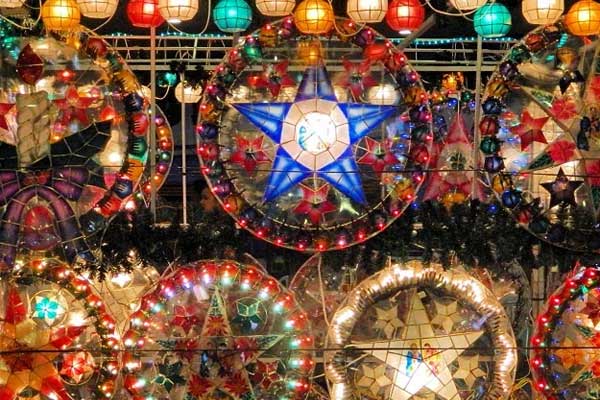 Luzviminda Gallardo was awarded on December 13 as the grand champion anew in the parol-making contest during the 14th annual Las Piñas Parol Festival. The event was held at the newly-inaugurated “The Tent” in Vista Global South on the occasion of former Senate president Manny Villar’s 70th birthday.

The wow factor in Gallardo’s eight-foot creation was that it was fashioned out of a combination of recyclable and organic materials–paper, rope, twigs, different types of grain, mussel shells, sea shells, etc.

For her winning efforts, Gallardo was awarded P20,000 in cash by Villar and his wife Senator Cynthia Villar.

Indeed, parol-making has become a source of livelihood and pride in Las Piñas. But, as with all traditions, they tend to wrestle with the passage of time and fail to thrive.

“These are professional parol-makers, three-generation parol-makers. We don’t want to lose that tradition,” said Senator Villar, who first organized the competition over a decade ago when she was still city mayor.

“Contests like these are meant to encourage the passing on of the craft to the next generation and continue the livelihood. It’s one of the things that we are really proud of,” said the lady lawmaker, who topped the Senatorial race during the midterm polls last May.

Gallardo gave an insight on the importance of lantern-making to local residents. “Nasa puso na namin siya at parang kulang yung aming buhay kung wala yung ganun (It’s etched in our hearts and I feel that our lives are incomplete without it).”

According to Senator Villar, the local parol-makers’ preference for the recycled theme spoke well of the city’s mindfulness of the environment.

“It’s our advocacy for the environment. It’s been our tradition to use those kinds of materials,” she said.

“Those are the materials available. If you eat mussels, why not use the shells? It’s their way of showing what they can do with recyclable materials,” explained the chairman of the Senate Committee on Environment, Natural Resources, and Climate Change.

Senator Villar boasted of Las Piñas City’s efficiency when it came to recycling.

“We recycle 80 percent of our waste. We make it a point to segregate before our garbage is collected. Our biodegradable materials are turned into organic fertilizers. This includes our kitchen and garden waste. Recyclable plastic are turned into school chairs,” she said, referring to the activities of the Villar Social Institute for Poverty Alleviation and Governance or Villar SIPAG.

This year’s iteration of the street dance contest benefitted greatly from the spacious Tent, which has a total capacity of 5,000 people.