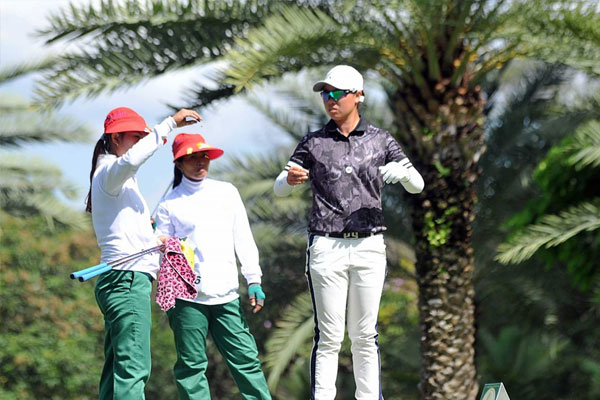 Running out of holes and space for a comeback to re-ignite a determined record drive, Yuka Saso made one big surge in the first six holes of Miyazaki Country Club's backnine and found her dream finish in a maiden LPGA of Japan Tour campaign back within reach.

Thanks to Ayaka Furue and Sakura Koiwai's meltdowns in the pivotal round of the JLPGA Tour Championship Ricoh Cup in MIyazaki Prefecture, the Fil-Japanese shotmaker's bid for at least three records got a big shot in the arm in challenging day Saturday.

After back-to-back 70s, Saso fashioned out a 69, birdying four of the first six holes at the back although another last hole bogey ruined her attempt to get closer to Erika Hara, who stayed on top at 10-under 206 with a scrambling 71.

From joint 10th in the first two days, the ICTSI-backed Saso gained solo fourth at 209, now just three shots behind Hara heading to the final 18 holes of the Y120 million championship.

But Saso's three-under card proved well enough to reinforce her drive for a record romp in the LPGA of Japan Tour, including the hotly disputed Player of the Year honors as Furue and Koiwai crumbled and tumbled when the going got tough.

Furue, who unseated the Saso from the top of the POTY derby with back-to-back victories the last two weeks, and Koiwai, in close third in the Mercedes ranking, flopped and limped with identical three-over 75s on missed shots and missed putts.

From solo second, Furue, who bogeyed two of the first seven holes and yielded two strokes on the par-3 No. 8, fell to joint 10th at 212 while Koiwai, who had three bogeys in a birdie-less 38-37 card, flipped to a share of 13th at 214 heading to what promises to be a fitting ending to the last leg of the 14-tournament pandemic-hit JLPGA season.

All the elements leading to a pulsating, thrilling finish are there.

Hara, winner of the season’s second major – the Japan Women’s Open last month, clipped Furue in the featured duel although she, like the rest of the elite 37-player cast made up of the season’s best and world-ranked players, slowed down with a one-under card on a three-birdie, two-bogey round after a 67-68.

Yuna Nishimura, who topped the Mitsubishi Electric four weeks ago, tied Hara at 10-under with a birdie on No. 12. But like most of the contenders for the top Y30 million purse, she holed out with a bogey for a 70 but still within reach at 207.

Veteran Momoko Ueda made an early move with two birdies in the first three holes, both par-4s, but failed to gain a stroke in any of the four par-5s and finished with a 70.

But no player would be as much driven in Sunday’s final round than Saso, whose bid for a record sweep of at least three JLPGA marks came to fore with her fiery backside charge coupled with Furue and Koiwai’s collapses.

At least a runner-up finish would make the rookie Saso, with winnings of Y89,253,170, the first player to collect Y100 million in earnings in just 14 tournaments. She is just 82.93 points behind Furue in the POTY race and is Y16,150,178 ahead of Furue in the money list category.

But Furue and Koiwai are also expected to go flat out for a rebound, so do the rest of those in the hunt, including Hara, Nishimura and Ueda, guaranteeing a tense, furious battle not only of shotmaking and putting but also of nerves and mental toughness with the title chase likely to go down to the last shot and putt in regulation or beyond.

Saso actually birdied the opening hole but went on a bogey-birdie-bogey roll from No. 5 and made the turn at 36, even falling behind by six off Hara, who hit two birdies against a bogey for a 35.

But she re-asserted her mastery of the first two holes at the back and birdied them for the second straight time then gained two more strokes on Nos. 13 and 15 to even move into joint third at eight-under overall before holing out with that bogey.

After a 31-30 putt showing in the first two days, Saso finally found her touch, a key to her record campaign, and finished with 28 putts set up by superb approach shots although she came through with a number of recovery shots after hitting just six fairways and missing the greens six times. Jeanne Cortez