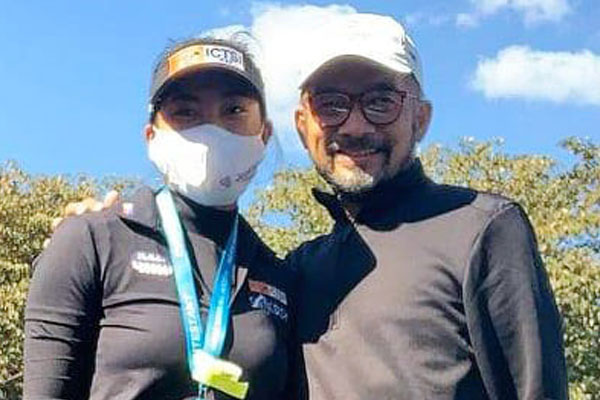 Funny but despite two 65s, in bogey free fashion no less, Bianca Pagdanganan’s name is hardly or not being mentioned at all in LPGA Tour’s Women’s PGA Championship conversations.

Either they think her exploits are just a product of the so-called stroke of luck or her surge to solo fifth place, just four shots off Korean Sei Young Kim, would stop when the going gets tough in Sunday’s final round.

Whatever, the Filipina rookie kept doing her talk on the course with her big shots, matching her solid second round 65 to crash into the elite Top 5 made up of LPGA Tour multiple winners and major champions after 54 holes of the $4.3 million event in Pennsylvania Saturday.

Keeping the momentum of her bogey-free five-under card at the par-70 Aronimink Golf Club in Newport Square Friday, Pagdanganan birdied Nos. 2, 4, 9, 13 and 16 inside 13 feet and completed her last 36 holes without a bogey by rescuing three pars (Nos. 6, 8 and 12) in a big, big charge by a first-time major bidder who never had a hint at ever finding herself in the mix with great players for a shot at the crown after a forgettable wind-blown opening 77.

She even described her fifth ranking as outrageous.

“I guess it’s crazy that my name would be up in the leaderboard at a major,” Pagdanganan, whose 54-hole aggregate of three-under 207 pulled her to within four shots off Kim.

Finding herself just four strokes behind of a slew of winners and seasoned campaigners in a challenging course naturally stirred up mixed emotions for the 22-year-old campaigner, whose best finish in her first four regular LPGA Tour events was joint 28th in the Drive On Championship in Ohio last July.

“I’m feeling all sorts of things right now,” she said. “I’m nervous and excited. I put myself in a good position for tomorrow (Sunday). I just need to keep doing what I have been doing in the past two rounds.”

"We all know that anything can happen in golf," added the LPGA Tour’s driving leader.

She made it happen – at least in the last two rounds. While players of lesser stuff would quietly bow out of the scene when confronted by all the elements that would lead to a horrible start in a premier championship featuring the world’s best, Pagdanganan proved she was of different breed.

Way off the cutoff line at tied 113rd, she bucked overwhelming odds to fire a solid 65 and leapfrog to joint 24th then sustained her charge, even humbling former world No. 1 Sung Hyun Park in their duel to churn out another gem of a round.

“I wouldn’t say I was intimidated (by Park),” she said. “It’s always fun to play with great players and learn about their game. It makes me think of what else I could do to improve my game.”

“She was pretty quiet and we didn’t really talk,” said the 2019 SEA Games double gold medalist of the player who survived another young Pinay talent in Yuka Saso in the 2019 The Country Club Invitational back home.

Everything she did right Friday she did again in moving day although she had to come up with big recovery shots to check a rather conservative game that saw her miss eight fairways. She reached all but three greens and finished with 29 putts after a 28-putt norm in the previous round.

“I don’t think there was any difference from the previous round. I played a little conservative and stayed very patient. It was a pretty average game,” she said, adding she would always step on the first tee with little expectations.

“I don’t like being over confident before a round. It’s always a fresh start for me before every round. That way I get to clear my mind a bit and calm myself down,” said Pagdanganan, who drilled in a 12-footer on No. 2 to kick off her birdie run that would include a six-footer on No. 4, a 15-footer on No. 9, a stirring 27-footer on No. 13 and a five-footer on the 16th.

Aside from her Drive On joint 28th effort, Pagdanganan tied for 59th in the Marathon Classic, ended up 64th in the Portland Classic and shared 71st place in NW Arkansas Championship although she created quite a stir and made some conversations after emerging the driving leader with a 287-yard norm.

Within striking distance off the pace with 18 holes left, Pagdanganan hopes to cap her great run for major glory or break or at least match two-time LPGA winner Jennifer Rosales' couple of fourth place feats in the majors -- in the 2002 British Open and in 2004 US Open.

"I'm just going to stick to my game plan and hopefully it will turn out good," said Pagdanganan.

Better still, to get her deserved spot in the conversations. (Jeanne Cortez)